Russia: protest 'seen as a crime' by authorities - new report 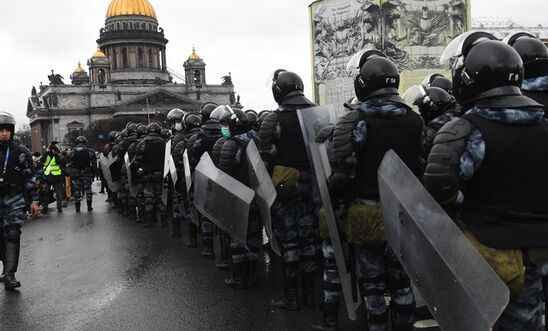 Gatherings are forbidden outside court buildings or prisons, while in some regions virtually all urban areas are off-limits to protesters

The Russian authorities have eroded the right to freedom of peaceful assembly with increasingly restrictive laws and heavy-handed policing to the point where it is almost impossible for people in Russia to protest, Amnesty International said in a new report today.

In its 21-page report - Russia: no place for protest - Amnesty shows how a clampdown on peaceful protests - which began with the 2004 Federal Law on Assemblies - has accelerated in recent years via a succession of legislative amendments and the imposition of harsher punishments for various purported “offences”.

The relentless clampdown has spanned most of the Putin era in Russia but has worsened markedly in recent years.

Nine out of 13 major legislative amendments used to curtail the right to freedom of assembly in Russia have been introduced since 2014. Under these, organisers of almost all protests are required to submit prior notification to the authorities, while spontaneous or unplanned assemblies are universally forbidden.

Since last December, foreign citizens, foreign and international organisations - as well as Russian nationals and NGOs labelled “foreign agents” by the authorities - are barred from financing public gatherings. In addition, assemblies of more than 500 participants must be organised and funded using a designated bank account or are considered illegal.

“It has taken the Russian authorities 16 years and 13 instances of parliamentary tinkering with legislation to make the right to freedom of peaceful assembly devoid of any genuine meaning.

“Peaceful street protest has come to be seen as a crime by state officials - and an act of heroism by those Russians who still believe it is their right to exercise it.

“The unlawful restrictions, requirements and harsh sanctions that Russian protesters face can only be described as Kafkaesque in their absurdity.

“Besides being criminalised for exercising their right to peaceful protest, detained protesters in Russia are also subjected to unfair, almost parody trials, sometimes taking as little as five minutes, with no key witnesses summoned and the truthfulness of police reports accepted unquestioningly.

“Next month’s parliamentary elections give Russia the opportunity to change its approach to commit to promotion and protection of human rights, including the right to freedom of peaceful assembly.”

The briefing also details the excessive use of force by police officers, who have been documented using martial arts techniques against protesters, battering them mercilessly with batons and, beginning this year, stunning them with electroshock weapons. Despite widespread public outcry over cases of excessive use of force by the police - including the case of Margarita Yudina, a peaceful protester needing intensive care treatment after being kicked in the stomach by a riot police officer earlier this year - the authorities either fail to investigate and bring suspected perpetrators to justice, or they derail such investigations.

Downloads
Russia: no place for protest