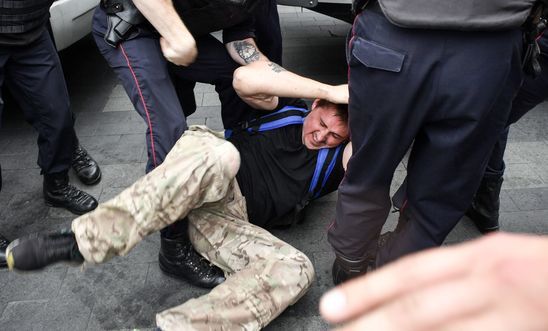 Amnesty International has condemned the excessive use of force by Russian police and the bringing of unfounded charges against protesters for “participation in mass disorder”, after mass arrests during a police crackdown on an opposition rally in Moscow today.

In total more than 590 people were detained during the protest in central Moscow which the city authorities said was “unauthorised”.

The arrests follow a similar police crackdown on peaceful protests a week ago which resulted in nearly 1,400 detentions.

Ahead of today’s protest the authorities launched a probe into “mass disorder” and charged at least ten individuals under Article 212 of the Russian Criminal Code.

Last week, Amnesty observers at the 27 July protest concluded that it was peaceful until police charged the crowds.

“The Russian authorities have shown nothing but disdain for human rights and the notion of peaceful protest.

“Thousands of Russians have repeatedly come out into the streets in recent weeks to protest against electoral manipulation and discrimination against opposition candidates, only to be met by baton-wielding police and the brutal use of force.

“We call on the Russian authorities to respect the country’s human rights obligations and Constitution, and ensure the right to freedom of peaceful assembly is respected and facilitated.

“The unfounded ‘mass disorder’ charges against demonstrators must be dropped, and all imprisoned peaceful protesters released.”