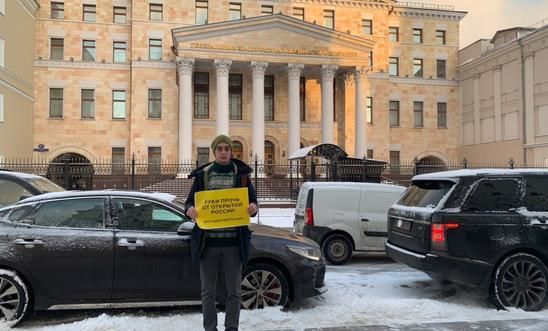 The Russian authorities must stop their vicious campaign against opposition movement Open Russia (Otkrytaya Rossia), Amnesty International said today, after an activist from the organisation was charged for posting solidarity messages about a recently detained colleague.

In a further tragic twist, Shevchenko’s 17-year-old daughter died in hospital this morning. The authorities refused Shevchenko permission to visit her until hours before she passed away.

“The government’s crackdown on Open Russia is not only absurd and vicious, it has also reached a new level of cruelty.

“The persecution of Roman Zaitsev for supporting Anastasia Shevchenko, just at the time of her profound personal tragedy, says a lot about Russia’s heartless ‘justice’ system.

“If merely sharing a piece of news about an opposition group becomes a reason for prosecution it potentially puts at risk thousands of people who have reposted, retweeted or quoted Open Russia materials.”

The Prosecutor's Office of the Central District of Volgograd last night charged Roman Zaitsev, Open Russia’s regional coordinator, with “carrying out the activities of an undesirable organisation”.

He is being prosecuted for reposting Open Russia’s news and messages of solidarity for Anastasia Shevchenko, who is a prisoner of conscience.

Anastasia Shevchenko became the first ever person to be criminally charged with “repeated participation in the activities of an undesirable organisation” when she was placed under house arrest on 23 January. If convicted, she could face up to six years in prison for her peaceful activism.

It was only late last night, hours before her daughter’s passing, that Anastasia was finally given permission to see her.

“The callousness of the Russian authorities’ campaign against Open Russia is unconscionable.

“Not only has the state placed an innocent person under house arrest for her peaceful activism, but in an act of ultimate cruelty it denied Anastasia Shevchenko the chance to take care of her dying daughter.

“Anastasia must be freed now, and the spiteful campaign against Open Russia and all peaceful dissenting voices in Russia must end.”