Russia: Closure of International Memorial is a 'blatant attack on civil society' 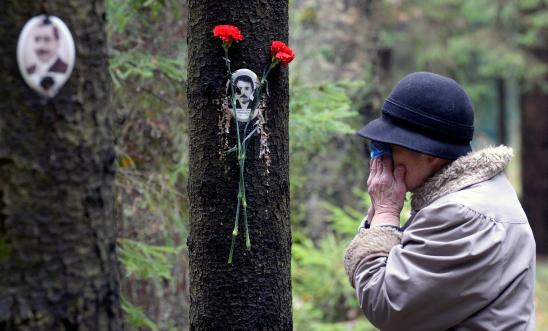 A woman reacts next to a portrait of a victim of Soviet dictator Joseph Stalin's purges at the memorial, where the victims were buried in the woods on the outskirts of Saint-Petersburg, on October 30, 2017. © AFP via Getty Images

Founded in 1989, International Memorial is one of Russia’s most respected civil society organisations in the country

“International Memorial is a highly respected human rights organisation that has worked tirelessly to document the atrocities and political repression carried out under the rule of Joseph Stalin and other Soviet leaders.

“By closing down the organisation, Russian authorities trample on the memory of millions of victims lost to the Gulag and is a direct assault on the rights to freedom of expression and association.

“The authorities’ use of the ‘foreign agents’ law to dissolve the organisation is a blatant attack on civil society that seeks to blur the national memory of state repression.

“The decision to shut down International Memorial is a grave insult to victims of the Russian Gulag and must be immediately overturned.”

The prosecutors claimed that International Memorial repeatedly violated the “foreign agents” law by refusing to label their content as produced by a “foreign agent” or adding lengthy disclaimers stating the same.

A request to liquidate Human Rights Centre Memorial, International Memorial’s sister organisation, was also submitted to Moscow City Court on the same day. The court is due to make a decision on this request in the coming days.

The twin Memorial organisations are among the oldest and most respected human rights groups in Russia. They started operating in 1988 during the wave of perestroika reforms. The Soviet dissident and Nobel Peace Prize winner Andrei Sakharov was the first chair of Memorial until his death in 1989.