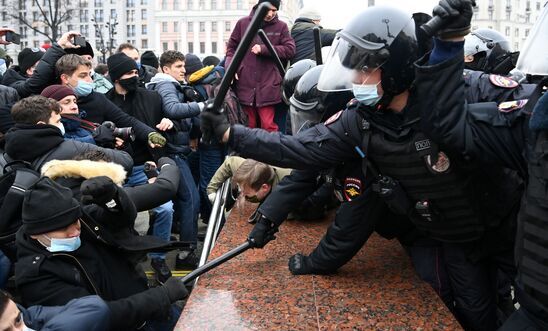 Dozens of supporters of Aleksei Navalny targeted in crackdown

Maria Alyokhina of punk band Pussy Riot among those detained

“The crackdown on dissent in Russia has become increasingly brutal – and desperate – even compared to vicious reprisals in recent years. The authorities appear shamelessly bent on violating human rights by silencing their critics.

“In the last few days, the authorities have detained a young mother, raided the home of a prominent journalist’s elderly parents, and opened criminal prosecutions on dubious grounds, such as the violation of sanitary regulations by demonstrators.

“This wave of reprisals is obviously aimed at repressing growing popular dissent in Russia. It is a cowardly attempt to prevent further planned peaceful protests against the prosecution of prisoner of conscience Aleksei Navalny, and the allegations of top-level corruption in Russia which he unearthed.

“The persecution of peaceful protesters must stop immediately, and Russian citizens must be able to exercise their rights to freedom of peaceful assembly and expression, on 31 January or whenever they choose – these are fundamental rights.”

Raids on homes and offices

Yesterday afternoon (27 January), at least 18 raids were carried out at homes and offices of leading opposition activists, journalists and government critics in Moscow.

The security forces stormed apartments where the wife of prisoner of conscience Aleksei Navalny, Yulia Navalnaya, and his brother Oleg live. Simultaneously, they conducted a raid on the Anti-Corruption Foundation office and studio of Navalny Live, the opposition activist’s popular YouTube channel.

At the same time, a number of raids were conducted on the homes of Anastasia Vasilyeva, the head of the Alliance of Doctors union; Maria Alyokhina of the Pussy Riot punk band; and the parents of Sergei Smirnov, editor-in-chief of independent media outlet Mediazona, amongst others.

These actions were taken under the pretext of investigating a criminal case based on Article 236 of Russia’s Criminal Code (violation of sanitary and epidemiological standards, which inadvertently entailed or threatened to result in a mass illness or poisoning of people). Those targeted include organizers and participants of protests that were violently dispersed by the authorities on Saturday 23 January. If found guilty, they face up to two years’ imprisonment.

Currently, there are dozens of criminal cases that have been opened in Russia against political activists on contentious grounds – such as road blockages, violation of COVID-19 quarantine restrictions, damage to state property, and the use of violence against police officers.