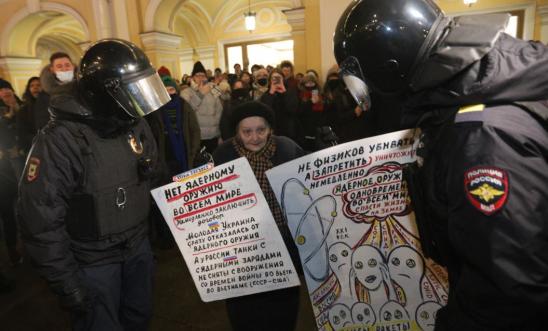 Words ‘war’, ‘invasion’ and ‘attack’ all banned by media regulator in descriptions of Russia’s actions in Ukraine

‘We ask the international community to provide all possible support to Russian reporters, human rights defenders and activists’ - Marie Struthers

By blocking the most popular critical media outlets, closing independent radio stations and forcing dozens of journalists to halt their work or leave the country, the authorities have almost completely deprived people in Russia of access to objective, unbiased and trustworthy information.

Since the start of the invasion, Russia’s media regulator Roskomnadzor began to establish widescale censorship to silence dissent (see timeline below).

On 24 February, Roskomnadzor ordered all media outlets to only use official, state-sanctioned information sources or face severe punishment for spreading “fake news”. The words “war, “invasion” and “attack” were all banned from use when describing Russia’s military actions in Ukraine. Roskomnadzor has also blocked access to Facebook and Twitter.

The blocking of news sites and the threat of criminal prosecutions has led to an exodus of journalists from Russia. According to Agentstvo, an investigative journalism site now inaccessible in Russia, at least 150 journalists have fled the country since the beginning of the war.

“For two decades, the Russian authorities have waged a covert war against dissenting voices by arresting journalists, cracking down on independent newsrooms and forcing media owners to impose self-censorship.

“After Russian tanks entered Ukraine, the authorities switched to a scorched-earth strategy that has turned Russia’s media landscape into a wasteland.

“The courageous people in Russia who oppose the war face serious personal risk.

“We call on the Russian authorities to end their relentless assault against civil society organisations and journalists.

“The free press in Russia has not died despite the authorities’ relentless efforts.

“In dark times like these, only solidarity and goodwill can challenge the onslaught of state violence and rampant lawlessness.

“We ask the international community to provide all possible support to Russian reporters, human rights defenders and activists who continue to deliver the truth and stand up against injustice despite suffering terribly for their cause.”

Despite the introduction of draconian restrictions and a ferocious police response to peaceful protests, Russia’s anti-war movement continues to fill the streets in numerous Russian cities with rallies even though the authorities immediately and brutally disperse them.

People deprived of their liberty in Russia are routinely subjected to beatings, humiliation and other forms of ill-treatment. Many people have also said they were denied access to lawyers and deprived of food, water or bedding. In one particular case, at Brateyevo police station in Moscow on 6 March, a protester recorded a policeman telling her, “It’s over. Putin is on our side. You are the enemies of Russia. You are the enemies of the people”. He then said “we’re gonna kill you all here and that's it. We'll get another reward for it”, as they dragged her by the hair and smashed her in the face with a plastic water bottle.

On 28 February - Roskomnadzor blocked Nastoyashchee Vremya (Current Times), a subsidiary of Radio Free Europe/Radio Liberty, for spreading “unreliable” information about the invasion. On 1 March, almost all Ukrainian news outlets were inaccessible to internet users in Russia.

Over the days that followed, the Kremlin ruthlessly censored a swathe of independent media, including broadcaster TV Rain, Echo of Moscow radio station, Latvia-based Meduza, critical Russian news outlets Mediazona, Republic and Sobesednik, grassroots activism portal Activatica, and the Russian-language services of the BBC, Voice of America and Deutsche Welle.

TV Rain chose to suspend broadcasting amidst fears of reprisals. Znak.com, a significant regional news channel, halted its operations citing censorship fears. The Echo of Moscow radio station was taken off air; shortly after, its state-aligned owners decided to liquidate the company. Even Novaya Gazeta, a beacon of independent journalism led by Nobel Peace Prize laureate Dmitry Muratov, announced on 4 March that it would remove articles on Russia’s invasion of Ukraine.

From 1 March - Roskomnadzor began to slow traffic on Twitter and Facebook to a crawl, before accusing the two companies of disseminating “inaccurate” information about the conflict in Ukraine. On 4 March, both social media platforms were blocked.

On 4 March - Russia’s parliament introduced legislation that further criminalised sharing “false information” about the activities of the Russian Armed Forces or “discredits” Russian troops. Anyone accused of committing these “crimes” could face extortionate fines or a prison sentence of up to 15 years. Over the following three days, more than 140 people were detained under the new law which effectively bans the word “war” and any calls for “peace”.

On 5 March - two investigative reporting outlets, Vazhnye Istorii (Important Stories) and the Organised Crime and Corruption Reporting Project, were designated as “undesirable organisations”, which criminalised their operations and barred them from working in Russia.

On 9 March - a new bill was introduced in the State Duma creating a “unified register” of all current and former employees or members of NGOs, public associations and media entities labelled as “foreign agents” and persons labelled as such individually.