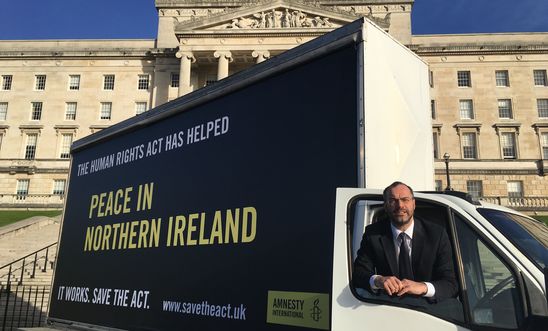 Amnesty has today launched a huge public awareness campaign on the importance of the Human Rights Act, which the government has repeatedly threatened to scrap, highlighting its role in the Good Friday Agreement as well as in the inquest into the Hillsborough disaster earlier in the year and a variety of other cases people do not readily associate with the Act. The campaign will feature billboards and screens in across the UK. There will also be mobile billboards in Belfast and London, printed adverts in newspapers and extensive online advertising. One of the billboards will be revealed on Tuesday morning (11am) in front of Parliament Buildings at Stormont.

Victims campaigner Alan McBride, who lost his wife Sharon in an IRA bombing in Belfast in 1993, said that people were right to be worried, as he joined the call on Theresa May to issue an assurance that the Act would not be repealed.

“Repealing the Human Rights Act could damage the hard-won peace we’ve fought for in Northern Ireland. If people are now going to start tampering with decisions that were made in the Good Friday Agreement, I think we should all be very frightened.”

“We would never have contemplated that the Human Rights Act would be in jeopardy at any stage. It was a building block of our agreement. To take this away from Northern Ireland is just absolutely shocking.”

“Repealing the Human Rights Act would be like pulling the rug out from under the Good Friday Agreement.

“Peace in Northern Ireland is all too precious, and still too fragile to be put at risk by this fundamental threat from Westminster.

“The threat to the peace agreement worries those who negotiated the Agreement, Troubles victims, and many ordinary people across Northern Ireland and the rest of the United Kingdom.

“Theresa May should calm peoples’ fears by ruling out once and for all that the Act could be taken away.”

More information about all the cases as well as powerful videos – including one featuring Alan McBride and Professor Monica McWilliams - and a petition already signed by more than 130,000 people will be available at: www.savetheact.uk