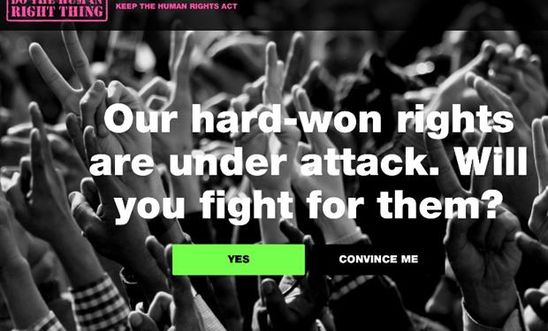 The heads of Amnesty International in the UK and Ireland have written to the British and Irish Prime Ministers highlighting “deep concern” that moves to repeal the UK Human Rights Act 1998 could undermine peace in Northern Ireland.

In letters sent to UK Prime Minister David Cameron and Irish Taoiseach Enda Kenny, Amnesty warns that the planned repeal by the UK government of the Human Rights Act 1998 “could have serious implications for Northern Ireland's peace settlement” and could undermine “public confidence in the new political and policing arrangements” which followed the 1998 Good Friday Agreement.

New policing arrangements in Northern Ireland, introduced after the Good Friday Agreement, are also heavily reliant on adherence to the Human Rights Act and the European Convention on Human Rights. Trust in the new policing structures in post-Troubles Northern Ireland is seen as one of the key success stories of the peace process.

“The Good Friday Agreement is the cornerstone of a more peaceful Northern Ireland. The Human Rights Act not only fulfils one of the UK’s key obligations in the Agreement, but is crucial to ensuring public confidence in the new political and policing arrangements.

“Given the history of political discrimination and mistrust in policing in Northern Ireland, binding human rights obligations have been crucial in building and bolstering public confidence in these key structures post-Troubles.

“But public confidence can be eroded and undermined just as surely as it can be built.

“Any scrapping of human rights commitments could have serious implications for Northern Ireland's peace settlement.”

“The Good Friday Agreement was endorsed by the people in referenda on both sides of the Irish border and our government is a co-signatory, alongside the UK, to the Treaty.

“As such, the Irish government must defend the integrity of the Agreement and ensure no erosion of the human rights protections which are central to the peace settlement. We welcome the Irish Government’s expressions of concern at the UK’s proposed repeal of the Human Rights Act, and the Minister for Foreign Affairs and Trade’s stating he will raise this with Northern Ireland Secretary Theresa Villiers.

“We urge the Taoiseach to make urgent and strong representations to the UK Prime Minister to ensure that hard-won progress in Northern Ireland is not now put at risk.”

The warning is the latest part of Amnesty’s campaign calling for the protection of the Human Rights Act. The planned repeal of the Act would constitute the biggest roll back in rights in British history, the organisation has warned, and could lead to the unravelling of rights progress around the world. More than 60,000 people have already back Amnesty's call to save the Human Rights Act.