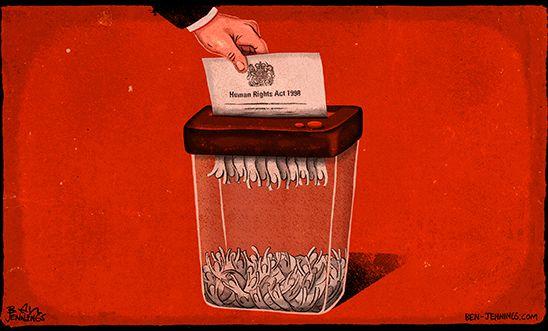 The UK Government announced a series of regressive measures in the Queen’s Speech today which Amnesty warned would make it harder for ordinary people to challenge unfair treatment and would damage the UK’s ability to stand up for human rights internationally.

Plans announced included a long-threatened move to repeal the Human Rights Act and replace it with a “Bill of Rights”, an intention to move forward with legislation around the legacy of the Northern Ireland conflict, and a renewed attempt to push through highly authoritarian anti-protest measures in a new Public Order Bill.

“Scrapping the Human Rights Act and replacing it with a narrower, meaner Bill of Rights will make it even harder for ordinary people to challenge mistreatment at the hands of the state.

“Relatives of the Covid bereaved, women challenging serious failures to investigate and prosecute rape, activists fighting for abortion services in Northern Ireland - all these rely on the Human Rights Act.

“Quite simply, the Human Rights Act is the single most important piece of human rights legislation in the UK.”

“It’s frightening to see the Home Secretary demonising people who are simply exercising their right to peaceful protest.

“These authoritarian provisions, recently removed by the Lords from the Policing Bill, are similar to repressive policies in countries the UK regularly criticises - including Russia, Hong Kong and Belarus.

“It follows a pattern of a Government voicing support for protest around the world but cracking down on the right to speak up here at home.”

The Northern Ireland ‘Troubles’ Bill does not depart from current government plans and would introduce a de facto amnesty for ‘Troubles’ cases in Northern Ireland, despite widespread opposition from victims and significant international concern.

“The Northern Ireland Troubles Bill would ride roughshod over the rights of victims, shamefully seeking to permanently deny families truth, justice and accountability they have desperately waited decades for. It must be rejected by Parliament.

"The rule of law must apply to all, and victims’ rights must be safeguarded. We urge government to urgently establish a way forward that will ensure no one is above the law and beyond accountability”

Amnesty also warned that scaling back and altering human rights protections domestically would have serious repercussions for the UK’s ability to speak out on human rights issues internationally.

“Taking an axe to human rights at home will significantly undermine our ability to hold other countries to account, just when we need to be speaking out from a position of strength on the horrors in Ukraine, Xinjiang or Tigray.

“If the Government pushes ahead with these plans, the UK will be a diminished country on the international stage.”

Amnesty also raised concerns about the Counter State Threats Bill which could pose a serious threat to journalists and their ability to protect their sources.