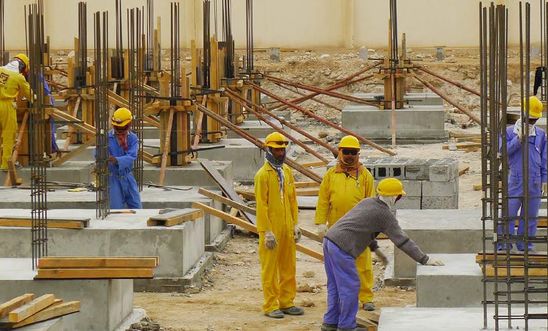 New research by Amnesty International published today reveals that hundreds of migrant workers in Qatar are going unpaid despite Qatar’s repeated promises to improve workers’ rights ahead of the 2022 World Cup.

The true scale of the problem is likely to be far bigger, with the US State Department estimating that more than 6,000 workers submitted complaints to Qatar’s new Committees for the Settlement of Labour Disputes during last year alone.

Since March last year, more than 2,000 people working for Hamton International, Hamad bin Khaled bin Hamad and United Cleaning have been seeking justice, after the companies stopped paying wages for several months - citing financial difficulties - before ceasing operation and ending their contracts. The companies were working on a range of construction projects and cleaning contracts. At least 1,620 workers submitted complaints to the Committees for the Settlement of Labour Disputes. While some were eventually given part of what was owed in exchange for dropping their cases, most went home with nothing and none received compensation through the committee system (see testimonies below).

The Qatari Ministry of Administrative Development, Labour and Social Affairs told Amnesty it helped to negotiate many of the settlements and provided food and generators at workers’ camps.

While Qatari law states that the committees are supposed to issue judgements on cases within six weeks of a complaint, Amnesty found that workers had to wait between three and eight months. In the meantime, they lived without income in labour camps lacking sufficient food or running water, facing an impossible choice over whether to go home or fight on.

Amnesty wrote to all three companies to present its findings, but received no response.

“Despite the significant promises of reform which Qatar has made ahead of the 2022 World Cup, it remains a playground for unscrupulous employers.

“Migrant workers often go to Qatar in the hope of giving their families a better life - instead many people return home penniless after spending months chasing their wages, with too little help from the systems that are supposed to protect them.

“Migrant workers in Qatar too often face an impossible choice between long and often fruitless efforts to seek justice, or returning to their families without the money needed to support them.

“We are urging the Qatari authorities to fully deliver what has been promised and end the shameful reality of labour exploitation.

“If Qatar is serious about meeting its promises to improve workers’ rights, it must provide more judges to ensure cases are heard rapidly, fully finance the compensation fund, and ensure companies that break the rules face justice.”

“For five months I had to live with very little food and no salary. My family was really affected. Tears come to my eyes when I remember where we used to go to find food … in the bins. After two years and five months of working with United Cleaning without taking any vacation, the company owes me a lot of money which they refuse to pay me. If I get it, I can go home to my wife and son.”

Bijoy from India waited three months before even getting a date for a disputes committee hearing - by which time he decided to return home because his father was in hospital. Though owed more than 13,000 Qatari riyals [£3,000] by Hamton International, Bijoy had no option but to accept just 1,000 riyals and his ticket back to India. Hundreds of other Hamton workers faced the same predicament. Bijoy told Amnesty:

In addition to the prospect of a drawn-out complaints process, workers must also reconcile themselves to the fact that winning a case at the committee does not guarantee compensation will actually be paid. Workers are often forced to lodge a new case at the civil courts to try to force employers to pay them compensation. This in turn leads to further delays and more out-of-pocket expenses - often without success.

“Every session is the same, the judge told me to come back again and again. I spent my money on taxis going back and forth … I also had to request leave from my new job because I needed to go to court.”

The committees have been so inundated with complaints, and have so few judges, that workers are forced to wait months for their cases to be processed. Even when compensation is awarded it is often not paid, and Qatar has so far failed to launch the support fund it promised in October 2018.

Last October, Qatar announced it would introduce a Workers’ Support and Insurance Fund to provide compensation. Almost a year later it remains unfunded and unused, despite the urgent need.

Qatar hosts about two million migrant workers, but it still does not meet international labour standards. Amnesty has repeatedly called on Qatar to abolish the abusive “kafala” system, which ties workers to their employers for up to five years and prevents some groups of workers - such as domestic workers - from leaving the country without their employers’ permission.

Downloads
All work, no pay: The struggle of Qatar’s migrant workers for justice