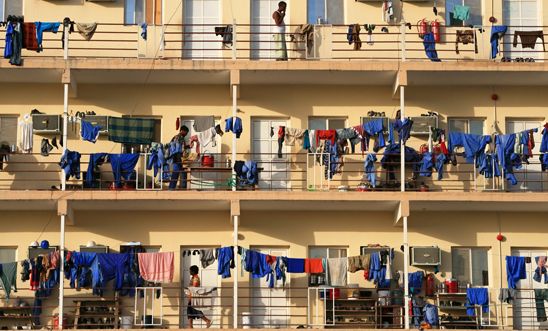 Qatar’s construction sector is rife with abuse, with workers employed on multi-million dollar projects suffering serious exploitation, according to a major new report published by Amnesty International late this evening.

As construction is set to begin on the FIFA World Cup 2022 stadiums, the 166-page report unpicks complex contractual chains and reveals widespread and routine abuse of migrant workers - in some cases amounting to forced labour.

The report, based on interviews with workers, employers and government officials, documents a range of abuses against migrant workers. These include non-payment of wages, harsh and dangerous working conditions, and shocking standards of accommodation. Researchers also met dozens of construction workers who were prevented from leaving the country for many months by their employers - leaving them trapped in Qatar. Amnesty’s findings give rise to fears that during the construction of high-profile projects in Qatar, including those which may be of integral importance to the staging of the 2022 World Cup, workers may be subjected to exploitation.

“Our findings indicate an alarming level of exploitation in the construction sector in Qatar. FIFA has a duty to send a strong public message that it will not tolerate human rights abuses on construction projects related to the World Cup.

“Qatar is recruiting migrant workers at a remarkable rate to support its construction boom, with the population increasing at 20 people an hour. Many migrants arrive in Qatar full of hopes, only to have these crushed soon after they arrive. There’s no time to delay - the government must act now to end this abuse.

“Construction companies and the Qatari authorities alike are failing migrant workers. Employers in Qatar have displayed an appalling disregard for the basic human rights of migrant workers. Many are taking advantage of a permissive environment and lax enforcement of labour protections to exploit construction workers.

“The world’s spotlight will continue to shine on Qatar in the run-up to the 2022 World Cup, offering the government a unique chance to demonstrate on a global stage that they are serious about their commitment to human rights and can act as a role model to the rest of the region.”

Amnesty’s findings highlight the inadequacy of the Qatari government’s existing arrangements to protect migrant workers and the organisation is urging Qatar to properly enforce existing labour protections, which many employers routinely flout. Amnesty is also calling for an overhaul of the “sponsorship” system, which leaves migrant workers unable to leave the country or change jobs without their employer’s permission.

Meanwhile, Amnesty’s report sheds light on current practices within the construction industry, in which some managers consider it normal to violate labour standards. Discriminatory attitudes towards migrant workers - many from South or Southeast Asia - are common, and Amnesty researchers heard a manager of one construction firm referring to the workers as “the animals”.

Amnesty found that some of the workers who had suffered abuses were working for small and medium-sized enterprises sub-contracted by global companies, including Qatar Petroleum, Hyundai E&C and OHL Construction. After Amnesty contacted several major companies about cases it had documented many expressed serious concerns about the findings and some said that they had carried out investigations. One company said it had upgraded its inspection regime as a result.

In one case, the employees of a company delivering critical supplies to a construction project associated with the planned FIFA headquarters during the 2022 World Cup were subjected to serious labour abuses. Nepalese workers employed by the supplier said they were “treated like cattle”. Employees were working up to 12 hours a day, seven days a week, including during Qatar’s searingly hot summer months. Amnesty is calling on FIFA to work with the Qatari authorities and World Cup organisers as a matter of priority to prevent abuses.

The report identifies cases that constitute forced labour. Some workers interviewed by Amnesty were living in fear of losing everything, threatened with penalty fines, deportation or loss of income if they did not show up to work even though they were not being paid. Faced with mounting debts and unable to support their families back at home, many migrant workers have suffered severe psychological distress with some even driven to the brink of suicide. “Please tell me - is there any way to get out of here? ... We are going totally mad,” one Nepalese construction worker, unpaid for seven months and prevented from leaving Qatar for three months, told Amnesty.

Amnesty has documented cases where workers desperate to get out of the country were effectively blackmailed to give up money owed to them by their employers. Researchers witnessed 11 men signing papers in front of government officials falsely confirming that they had received their wages so as to get their passports back to leave Qatar.

Meanwhile, many workers reported poor health and safety standards at work sites, including some who said they were not issued with helmets on sites. A representative of Doha’s main hospital said earlier this year that more than 1,000 people were admitted to the trauma unit in 2012 having fallen from heights at work: 10% were disabled as a result and the mortality rate was “significant”.

Amnesty carried out interviews with approximately 210 migrant workers in the construction sector, including 101 individual interviews, during two visits to Qatar in October 2012 and March 2013. Amnesty also contacted 22 companies involved in construction projects in Qatar, including meetings, telephone calls and written correspondence. Researchers held at least 14 meetings with Qatari government representatives, including from the Ministries of Foreign Affairs, Interior and Labour.

Downloads
The dark side of migration: spotlight on Qatar's construction ahead of the World Cup