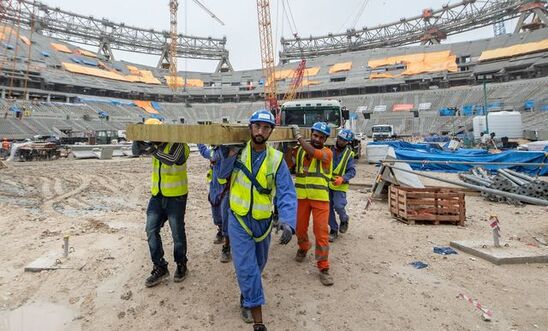 Workers at the Lusail Stadium in Doha © FIFA via Getty Images

Activist is under investigation for supposedly violating Qatar’s security laws

The Qatari authorities must urgently reveal the whereabouts of Malcolm Bidali, a Kenyan national who has been forcibly disappeared since 4 May, when he was taken from his labour accommodation for questioning by the state security service.

Bidali is a security guard, blogger and activist who has been vocal about the plight of migrant workers like himself and has written for a number of online platforms.

A week before his arrest, Bidali gave a presentation to a large group of civil society organisations and trade unions about his experience of working in Qatar.

On 11 May, a joint letter was sent to the Qatari authorities, urging them to investigate Bidali’s disappearance as a matter of urgency. Late yesterday (12 May), the Qatari government confirmed the activist had been detained and is under investigation for violating Qatar’s security laws and regulations. However, the authorities have not yet disclosed his whereabouts.

“Since arriving in Qatar three years ago Malcolm has been on the frontline of the fight to reform Qatar’s labour laws, including by writing about his experiences as a migrant worker in the country.

“It has now been more than a week since anyone heard from Malcolm, and we are extremely concerned for his wellbeing and that he may have been detained in reprisal for his legitimate human rights work.

“Despite our repeated requests to the Qatari authorities, we are still in the dark as to Malcolm’s location and the exact reason for his detention.

“We urge the authorities to disclose Malcolm’s whereabouts, and ensure he is protected from torture and other ill-treatment. They must outline any internationally-recognisable offence against him and ensure his right to due process is fully respected, including ensuring he has legal assistance.

“If Malcolm is detained solely for peacefully exercising his right to freedom of expression, he must be released immediately and unconditionally.”

For many years, Amnesty has been pressing the Qatari authorities to reform rights for the very large number of migrant workers in the country. This has led to new measures being introduced ahead of next year’s football World Cup. In March this year, Amnesty sent a four-page letter to FIFA President Gianni Infantino calling on the football body to take “urgent and concrete action” and “use the full extent of its influence” to urge Qatar to fulfil its programme of labour reforms before the World Cup kicks off at the end of next year.