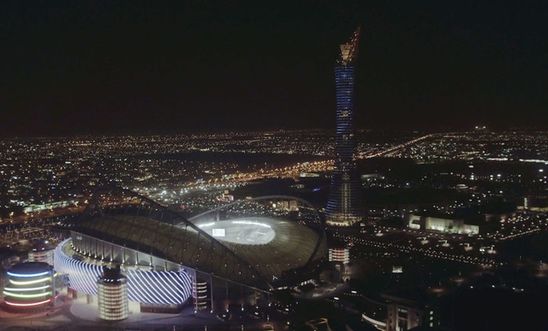 The stadium will be inaugurated tomorrow evening - becoming the first World Cup venue to open when it hosts the Emir Cup final between local sides Al Rayyan and Al Sadd - one month after independent auditors published fresh details of ongoing exploitation of migrant workers across Qatar’s World Cup projects.

“It’s a year since Amnesty International exposed the exploitation of migrant workers who helped to build the Khalifa Stadium, but abuses on Qatar 2022 sites have continued.

“Qatar’s World Cup organisers have placed special requirements on contractors that are supposed to stop this happening, but the reality is that workers on their sites still live under Qatar’s repressive sponsorship system, which gives employers powerful tools to abuse them.

“With hundreds of thousands more people being recruited to build and service at least seven more World Cup stadiums, along with the infrastructure to support the tournament, many more migrant workers are at serious risk over the next five years.

“Migrant workers at Khalifa International Stadium have already suffered the consequences of Qatar and FIFA’s failure to genuinely address the dangers of Qatar’s sponsorship system. An urgent rethink is needed to prevent labour abuse becoming the legacy of the 2022 World Cup.”

The ugly side of the beautiful game

In a March 2016 report called “The Ugly Side of the Beautiful Game: Exploitation of Migrant Workers on a Qatar 2022 site”, Amnesty highlighted how migrant workers were exploited at the Khalifa Stadium. Many of those interviewed by Amnesty revealed they were heavily in debt after paying large recruitment fees, while others had their passports confiscated and some were subjected to forced labour.

The audit, which focused on ten randomly-selected contractors (out of a total 149 World Cup contractors), mirrored many findings from Amnesty’s investigation. A range of abuses on World Cup projects were identified, including:

·    More than three-quarters (79%) of workers reported paying recruitment fees.
·    Contractors making workers work excessive hours, with half not giving them rest days, including one person who worked continuously without a day off for almost five months (148 days).
·    A quarter (25%) of workers at one company said they felt unable to report health and safety concerns for fear of reprisal.
·    Four of the ten contractors surveyed were holding workers’ passports, which is potentially an offence under Qatari law.

The auditors also assessed that some progress was being made, but abuses were identified at all ten contractors sampled.