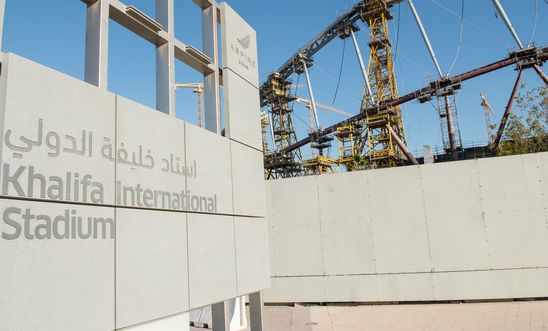 The 50-page report, The ugly side of the beautiful game: Labour exploitation on a Qatar 2022 World Cup site, is strongly critical of FIFA’s indifference to appalling treatment of migrant workers. The number of people working on World Cup sites is set to surge almost ten-fold to around 36,000 in the next two years.

“The abuse of migrant workers is a stain on the conscience of world football. For players and fans, a World Cup stadium is a place of dreams. For some of the workers who spoke to us, it can feel like a living nightmare.

“Indebted, living in squalid camps in the desert, paid a pittance, the lot of migrant workers contrasts sharply to that of the top-flight footballers who will play in the stadium. All workers want are their rights: to be paid on time, leave the country if need be and be treated with dignity and respect.

“Despite five years of promises, FIFA has failed almost completely to stop the World Cup being built on human rights abuses.

“Hosting the World Cup has helped Qatar promote itself as an elite destination to some of the world’s biggest clubs. But world football cannot turn a blind eye to abuse in the facilities and stadiums where the game is played.

“If FIFA’s new leadership is serious about turning a page, it cannot allow its showcase global event to take place in stadiums built on the abuse of migrant workers.”

The report is based on interviews with 132 migrant construction workers rebuilding Khalifa stadium, set to be the first stadium completed for the tournament and slated to host a World Cup semi-final in 2022. A further 99 migrants who were also interviewed have worked in landscaping the green spaces in the surrounding Aspire Zone sports complex, where Bayern Munich, Everton and Paris Saint-Germain players trained this winter.

Every single construction and landscape worker who spoke to Amnesty reported abuse of one kind or another, including:

Amnesty uncovered evidence that the staff of one labour supply company used the threat of penalties to exact work from some migrants such as withholding pay, handing workers over to the police or stopping them from leaving Qatar. This amounts to forced labour under international law.

The workers, mostly from Bangladesh, India and Nepal, spoke to Amnesty in Qatar between February and May last year. When Amnesty researchers returned to Qatar last month, some of the workers had been moved to better accommodation and had their passports returned by companies responding to Amnesty findings, but other abuses had not been addressed.

Nabeel (name changed to protect identity), a metal worker from India who worked on the Khalifa stadium refurbishment, complained when he was not paid for several months but only received threats from his employer:

“He just shouted abuse at me and said that if I complained again I’d never leave the country. Ever since I have been careful not to complain about my salary or anything else. Of course, if I could I would change jobs or leave Qatar.”

“My life here is like a prison. The work is difficult, we worked for many hours in the hot sun. When I first complained about my situation, soon after arriving in Qatar, the manager said ‘if you [want to] complain you can but there will be consequences. If you want to stay in Qatar be quiet and keep working’.”

Some of the Nepali workers told Amnesty International they were not even allowed to visit their loved ones after the 2015 April earthquake that devastated their country leaving thousands dead and millions displaced.

Qatar’s Supreme Committee for Delivery and Legacy, the organisation responsible for World Cup 2022 and ultimately for stadium construction, published Workers’ Welfare Standards in 2014. They require companies working on World Cup projects to deliver better standards for workers than are provided for under Qatari law.

“The Supreme Committee has shown commitment to workers’ rights and its welfare standards have the potential to help. But it is struggling to enforce those standards. In a context where the Qatari government is apathetic and FIFA is indifferent, it will be almost impossible for the World Cup to be staged without abuse.”

Sponsors and FIFA need to act

Amnesty is calling on major World Cup sponsors like Adidas, Coca-Cola and McDonald’s to pressure FIFA to address the exploitation of workers on the Khalifa stadium, and disclose its plan for preventing further abuses in World Cup projects.

Essential steps include removing employers' power to stop foreign employees from changing jobs or leaving the country, proper investigations into the conditions of workers and stricter penalties for abusive companies. FIFA itself should carry out, and publish, its own regular independent inspections of labour conditions in Qatar.

Facilities at the heart of world football

The Khalifa stadium is part of the Aspire Zone sports complex, whose Aspire Academy training centre and Aspetar medical facilities have been used by some of the world’s biggest football clubs. Stoke City goalkeeper Shay Given underwent a “rehabilitation programme” there earlier this year, Angel di Maria had his PSG transfer medical at the centre last year, and Manchester City and Ivory Coast international Yaya Toure was treated there for a minor injury before the 2014 World Cup.

“Some of world football’s biggest stars may already be training on pitches prepared and maintained by exploited migrant workers. They could soon be playing in stadiums built by them too.

“It is time for football’s leaders to speak out or be tainted by association, be they global football brands like Bayern Munich and PSG or major sponsors like Adidas and Coca-Cola.”

Downloads
Report - The ugly side of the beautiful game: Labour exploitation on a Qatar 2022 World Cup site