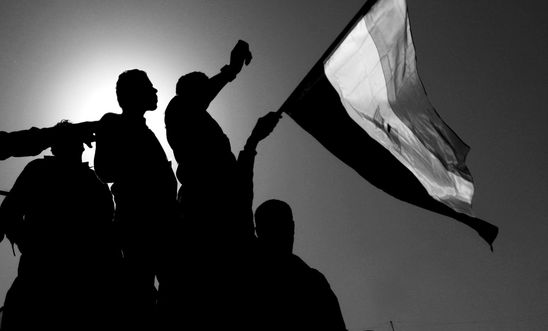 Amnesty International has today reiterated its call for the immediate and unconditional release of the prominent Egyptian photojournalist, Mahmoud Abu Zeid, popularly known as “Shawkan”, who has been in detention in Egypt for more than three years. The call came as Amnesty launched a powerful new exhibition of Shawkan’s photographs (28 Nov).

The Shawkan exhibition – featuring A2 sized images which illustrate both protests and daily life in Egypt – will be on display at Amnesty’s Human Rights Action Centre in Shoreditch, east London from Monday 28 November until Friday 16 December.

Last week Amnesty held a demonstration outside the Egyptian Embassy in central London, and tomorrow Shawkan’s plight will be marked as part of Amnesty’s annual Media Awards ceremony.

Shawkan was arrested in Cairo on 14 August 2013 while he was taking photographs of a sit-in of thousands of people – mainly supporters of ousted President Mohamed Morsi – who had flocked to the Rabaa al-Adaweya Square to protest Morsi’s ousting by the armed forces the previous month.  Security forces stormed the sit-in using bullets and tear gas, in the process killing more than 700 people. Shawkan – who features in Amnesty’s Write for Rights campaign – photographed the events as they unfolded. When they discovered he was a journalist, police arrested the photographer, tying his hands with plastic cables that cut through his skin, and beat him.

Shawkan faces nine false charges, including “joining a criminal gang” and “murder”. If convicted, he could face the death penalty.

“Shawkan’s arrest and detention is totally unjustified and a flagrant breach of Egypt’s own laws. His only ‘crime’ was to take photographs at a public demonstration. No journalist should ever be jailed for doing their job and taking photographs is not a crime. Shawkan’s detention is three years too long.  It’s time for his immediate and unconditional release, and the authorities should drop all charges against him.

“Egypt’s crackdown on the media did not begin and end with the Al Jazeera case. Tragically scores of journalists remain behind bars, and Shawkan’s awful situation shows how press freedom is now a distant memory in Egypt.

“We reiterate our call on Egyptian authorities to immediately release Shawkan and all the other journalists who are behind bars in Egypt simply for doing their job.”