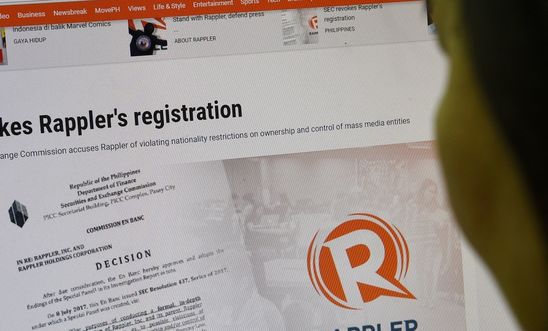 “Just days after the National Bureau of Investigation announced that it will indict Maria Ressa for cyber libel, a warrant for her arrest was served today. Amnesty International Philippines condemns the arrest based on a trumped-up libel charge.

“This is brazenly politically motivated, and consistent with the authorities’ threats and repeated targeting of Ressa and her team. Authorities should end this harassment, drop the charges, and repeal this repressive law.

“In a country where justice takes years to obtain, we see the charges against her being railroaded and the law being used to relentlessly intimidate and harass journalists for doing their jobs as truth-tellers.”

Use of ‘cyber libel’ law

On 29 May 2012 Rappler published a story, written by former reporter Reynaldo Santos Jr, alleging that a car used by former Chief Justice Renato Corona during his impeachment trial belonged to a businessman, Wilfredo Keng, who has alleged ties to human trafficking and drug smuggling rings.

On 10 January last year, Keng filed a ‘cyber libel’ complaint against Santos, Maria Ressa, and six members of Rappler’s board of directors under the Cybercrime Prevention Act of 2012. The National Bureau of Investigation subsequently dismissed the complaint because the report preceded the enactment of this law.

In a January 2019 decision obtained by Rappler this week, the Department of Justice revived the charges against Ressa and Santos, as well as Rappler Inc., on the grounds that the news article was updated in February 2014, and is therefore actionable.

Maria Ressa and Rappler Inc are already facing charges of tax evasion which Amnesty has condemned as politically-motivated. Rappler has been a consistent critic of the Philippine’s President Rodrigo Duterte and his administration, publishing detailed investigations into some of the thousands of extrajudicial executions committed by police and other unknown armed persons during drug-related operations.