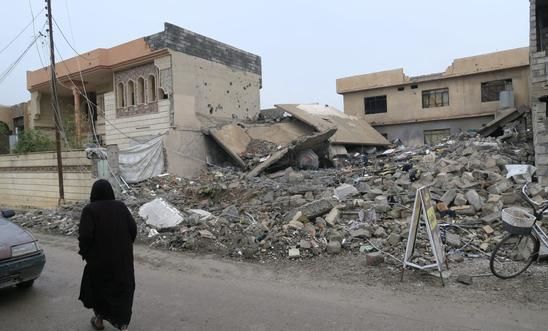 ‘Entire families are being killed inside their homes’ - Samah Hadid

In response to the US military saying this afternoon that one of its airstrikes killed at least 100 civilians in West Mosul’s Jadida neighbourhood in Iraq on 17 March, Samah Hadid, Amnesty International’s Middle East Deputy Director of Campaigns, said:

“The attack on the Jadida neighbourhood was a tragedy that alerted the world to the horrors being inflicted upon Iraqi civilians.

“Entire families are being killed inside their homes, where they are stuck between ground fighting and airstrikes.

“As the battle for Mosul draws to an end, there is no doubt that, once uncovered, the civilian death toll will raise alarm bells about the conduct of hostilities on all sides.

“We are in no position at this stage to confirm or deny the results of the US investigation. But as long as the conflict in Iraq is still raging, we call on Iraqi and US-led coalition forces to desist from using explosive weapons with wide-area effects - including artillery and mortars in crowded residential areas - and to take all feasible precautions to avoid civilian casualties.”

Recent visits to Mosul by Amnesty have revealed that Iraqi forces and the US-led coalition haven’t refrained from using explosive munitions in heavily-populated areas, including where civilians were being used as human shields by the Islamic State armed group. Hundreds of civilians have been killed by airstrikes inside their homes or in places where they sought refuge after following Iraqi government advice not to leave during the offensive to recapture the city of Mosul from ISIS. Survivors and eyewitnesses in east Mosul have said they didn’t try to flee as the battle got underway because they received repeated instructions from the Iraqi authorities to remain in their homes.