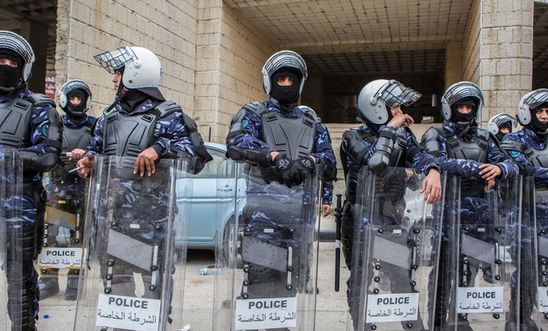 The Palestinian authorities must urgently investigate the alleged torture of Suha Jbara, a joint Palestinian, US and Panamanian citizen who has told Amnesty International about how she was beaten, slammed against a wall and threatened with sexual violence by her interrogators.

Ms Jbara, a social justice activist involved with Islamic charities who works to support the families of Palestinian prisoners in Israel, was arrested on 3 November during a violent raid on her home.

She was later questioned by prosecutors about allegations that she collected and distributed money in illegal ways, an accusation she denies.

Amnesty met Jbara in prison yesterday, when she told the organisation about brutal treatment at the hands of her interrogators in a three-day ordeal. She also told Amnesty she has suffered relentless harassment from officials to end a hunger strike she began on 22 November in protest at her detention and torture. She described how, upon her arrest, she had a seizure and lost consciousness and was taken to hospital. However, armed security officials later dragged her out of her hospital bed, barefoot, and transferred her to Jericho Interrogation and Detention Centre.

“I was in bed with tubes in my arms when I clearly remember armed men came into the room … The armed men took off the tubes and dragged me out. I was feeling very weak and could barely move or talk … They put me in a minivan and I slept on the floor. I woke up in another place and they said to me, ‘Welcome to the Jericho slaughter house’.”

At the detention centre, she said a male interrogator threw water in her face when she asked for a drink, slapped her, punched her on the chest and back, and threatened her with further violence. She was blindfolded and handcuffed throughout her interrogation and was not allowed to drink water or use the toilet.

“He insulted me all the time, used very dirty and violent sexual language, threatened to bring a doctor to look into my virginity and say that I was a whore, and threatened to hurt my family and to take my kids away from me.”

She was denied access to a lawyer during interrogation, and prosecutors from the attorney general’s office took her testimony in the presence of armed security officials at the interrogation centre. She was also not allowed to read her testimony before signing it. On 7 November she was presented to the Jericho Magistrate Court, which approved the prosecution’s request to extend her detention for 15 days. She was transferred to
the Jericho Correction and Rehabilitation Centre that day. She is due in court tomorrow.

She told Amnesty that she began a hunger strike on 22 November in protest at her torture during interrogation and unfair treatment by the prosecution and judiciary. She said that soon after she began the protest she was taken to hospital for a short time before being transferred back to the Jericho Correction and Rehabilitation Centre, where she was placed in solitary confinement as punishment.

“I am starting to get very tired. I feel pain in the lower back and lower back sides that sometimes travels to my legs. The most difficult thing of the hunger strike is the pressure that is put on me by everyone around me to stop what I am doing.”

She also said that several officials - including the governor of Jericho, a high-ranking police officer as well as doctors and nurses -had tried to persuade her to stop her hunger strike. She was also told that she was being denied family visits or phone calls as punishment for her protest.

“Suha Jbara has described her torture in harrowing detail.

“The Palestinian authorities must urgently carry out an independent and impartial investigation into these allegations.

“Any officials identified as responsible must be immediately suspended, prosecuted and brought to justice.”

Amnesty is also insisting that Suha Jbara be granted immediate access to her lawyers and protected from any further torture and other ill-treatment. Meanwhile, any legal proceedings against her must conform to international fair trial standards.

International donors should review their assistance

Palestinian forces in the West Bank and Gaza have a track record of arbitrarily arresting peaceful activists, demonstrators and critics, many of whom have faced judicial proceedings that do not meet fair trial standards. Amnesty is calling on international donors to the Palestinian security sector to review their assistance to ensure that it is not facilitating human rights violations and is in line with international standards.