Northern Ireland: women’s rights must not be traded away in post-election talks 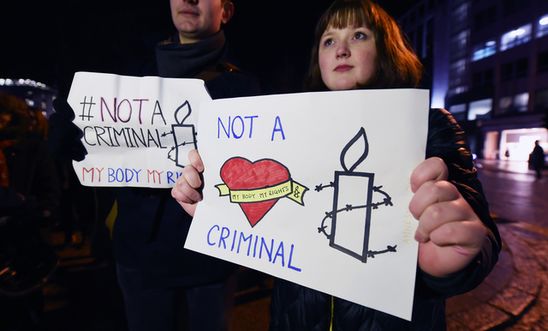 'Women’s rights are non-negotiable, there can be no hiding from abortion reform' - Grainne Teggart

Amnesty International has today issued a stark reminder to all political parties that abortion reform is unfinished business and must be an urgent priority after the Northern Ireland Assembly election and in any political talks that follow.

“After the Assembly election, all political parties must play their part in delivering abortion reform; there can be no hiding from this issue.

“Women’s rights are non-negotiable, Northern Ireland’s abortion law has been found by the courts and the UN to breach women’s rights.

With every passing day, women are being failed by the lack of progress on this issue. Our politicians need to stand with women and deliver much needed and long overdue change”.

In October 2016, Amnesty published a poll showing that nearly three-quarters of people in Northern Ireland want to see abortion law reform. The results showed overwhelming support from all religious backgrounds and political affiliations for a major overhaul of the region’s restrictive abortion laws. Northern Ireland is the only place in the UK where abortion is banned in almost all cases.

72% of people think abortion should be available if the pregnancy is a result of rape or incest; only 15% are opposed

67% of people think abortion should be available in cases of fatal foetal abnormality; just 17% are opposed

58% of people think abortion should be decriminalised so there would be no criminal penalty for women who have abortions in Northern Ireland; 22% are opposed to this change

59% of people think abortion should be decriminalised so there would be no criminal penalty for doctors and medical staff who assist women to have abortions in Northern Ireland; 21% are opposed to this change

75% of people think the fact that women from Northern Ireland who are seeking a lawful abortion must travel to England adds to their distress; 11% disagreed.

71% of people agreed that having to travel to England for a lawful abortion has a disproportionately negative impact on women with low income; 11% disagreed.

The polling was carried out in the week commencing 15 September 2016 by Millward Brown Ulster, using face-to-face interviews with a representative sample of 1,000 adults aged 16+, in multiple urban and rural locations across Northern Ireland.