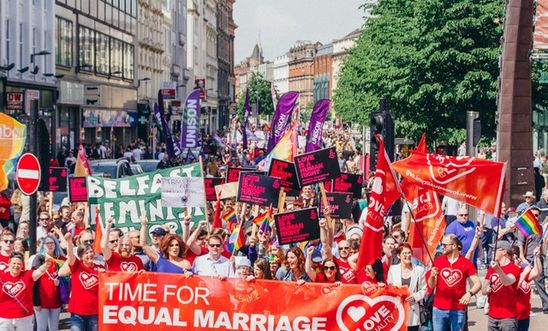 Amnesty International UK, Stonewall, the Trades Union Congress and the NUS call for marriage equality in Northern Ireland as the region marks two years without a sitting Assembly

Amnesty International, Stonewall, the Trades Union Congress and the National Union of Students have issued a statement urging the UK Government to legislate for same-sex marriage in Northern Ireland today (9 January), on the two-year anniversary of the collapse of Northern Ireland’s devolved government.

In a joint-statement, Kate Allen, Director of Amnesty International UK, Ruth Hunt, Chief Executive of Stonewall, Frances O'Grady, General Secretary of the Trades Union Congress and Shakira Martin, President of the National Union of Students have appealed to the UK Government to grant LGBT+ couples living in Northern Ireland the same rights as those living in the rest of the country.

“That's two more years during which same-sex couples in Northern Ireland have been denied the right to marry.

“Yet, in 2019, same-sex couples in Northern Ireland are still being denied that simple right. This is despite overwhelming support among the public there, as demonstrated in poll after poll, and the support of at least 55 of the 90 members of the Northern Ireland Assembly.

“However, the Assembly has not had the power to legislate for the last two years. Regrettably there is currently no talks process, never mind an agreement for a return of devolved government to Northern Ireland.  Given these unfortunate circumstances, the only legislature currently able to address this inequality is at Westminster.

“The UK Government is rightly proud of its record in promoting LGBT+ rights around the world. Yet, here in the UK, LGBT+ people are experiencing blatant discrimination on its watch.

“That is why, alongside our partners in the Northern Ireland Love Equality campaign, we are appealing to the Government to extend the England and Wales legislation to couples in Northern Ireland.

“The Stormont Assembly can then legislate on the matter in its own right when it returns.

“But meanwhile, LGBT+ couples must not be made to pay the price of the Assembly’s collapse. Instead, they should be able to celebrate and formalise their relationships in the same way as every other part of the UK.”

On 9 January 2017, Martin McGuinness resigned as deputy First Minister of the Northern Ireland Executive, collapsing both the Executive and the Northern Ireland Assembly. Attempts to restore power-sharing have failed and the region currently holds the world record for the longest period without a sitting government.

In November 2015, Members of the Northern Ireland Assembly voted to support equal marriage, but the measure was blocked by the Democratic Unionist Party which issued a Petition of Concern; a voting mechanism originally designed to protect the rights of minorities in Northern Ireland.

‘In accordance with the Belfast Agreement, [marriage] is a devolved matter which should be addressed in the NI Assembly; but the power of the Westminster Parliament to legislate remains unaffected. If this issue were to be raised in Westminster, the Government’s policy is to allow a free vote on matters of conscience such as equal marriage.’

However, to date, the UK Government has refused to legislate or allocate parliamentary time for either of the two Private Members' Bills which have been submitted to Parliament on equal marriage legislation.