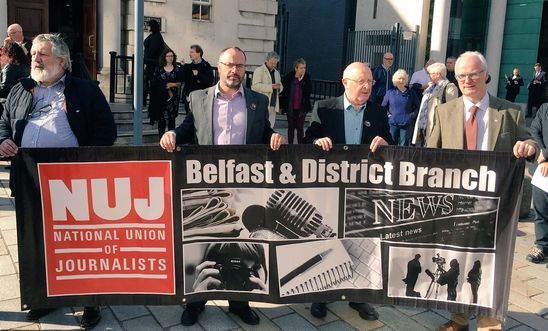 Amnesty calls for threat to be lifted immediately

Amnesty International has condemned a threat made against journalists at two Sunday newspapers in Northern Ireland, reportedly made by the South East Antrim Ulster Defence Association, and called for the threat to be lifted immediately.

“Amnesty International condemns this reported threat against journalists at two Sunday newspapers and calls for the threat to be lifted immediately. Such threats are a disgusting attempt to intimidate journalists from doing their jobs, and constitute an attack on freedom of the press in Northern Ireland. We send our solidarity to the journalists concerned.

“Northern Ireland continues to be the most dangerous part of the UK to be a journalist. Just last month there was a similar threat made by dissident republicans against a journalist at another Belfast newspaper. This practice of attacking the messenger must end.

“In the middle of the coronavirus pandemic, journalists here and around the world are providing an essential public service, helping to keep the public safe and holding governments to account.”