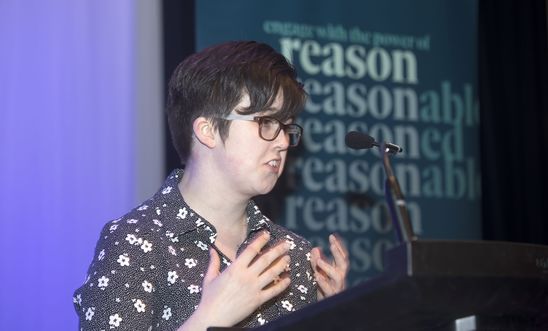 Lyra McKee, who was murdered in April © Kevin Cooper © Photoline

Campaigners in Northern Ireland have announced a major march and rally for marriage equality to be held in Belfast on Saturday 18 May, as political talks aimed at restoring devolved government for the region continue.

The Love Equality campaign, organisers of the march, are demanding that any re-established Stormont government must deliver marriage equality legislation to bring the region into line with the rest of the UK and Ireland. Failing that, they want the UK Government to intervene to end discrimination against same-sex couples in Northern Ireland.

Among the speakers who will address a rally in front of Belfast City Hall will be Sara Canning, partner of journalist Lyra McKee, who was murdered in Derry / Londonderry last month.

“Marriage equality is a cause to which Lyra and I were very committed.

“Lyra and I were supposed to be on a big trip to New York this week. We were going to get engaged.

“We talked about getting married in Donegal, but really we wanted our love and our marriage to be recognised in Northern Ireland, just the same as the rest of our family members and friends.

“But to date, politicians have stopped that happening here, despite the fact that most people support equal marriage.

“If the politicians won’t legislate for equal marriage at Stormont, then the Prime Minister should do it at Westminster. That’s what I told Theresa May at Lyra’s funeral.

“I wanted her to know that Lyra and I had a right to be treated as equal citizens in our own country. Surely that’s not too much to ask?

“Myself and lots of Lyra’s friends and family are going to be marching for marriage equality. We hope people will come and join us.”

Organisers expect thousands to join the march for marriage equality, which will begin at 1pm.

Patrick Corrigan, Northern Ireland director of Amnesty International and a member of the Love Equality campaign for equal marriage, said:

“It is time for political leaders in Belfast and London to respect the will of the people of Northern Ireland, which is overwhelmingly in support of marriage equality.

“This march will be a demonstration of that support, a demand which must be heard in the corridors of Stormont and Westminster.

“Marriage equality in Northern Ireland is a litmus test for whether or not any future devolved government is committed to treating all citizens equally.

“If Stormont is incapable of delivering equality for people here, then it is the responsibility of the Westminster to end discrimination against the LGBT community.”