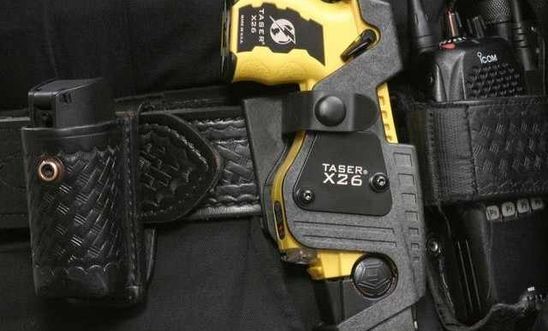 Responding to a report published today (Thursday) from Her Majesty’s Inspectorate of Constabulary and Fire and Rescue Services (HMICFRS) which suggests that the PSNI Chief Constable should consider the issue of Tasers to more police officers, Amnesty International has said the move would be a serious mistake for policing in Northern Ireland.

“Since these electro-shock devices were issued to the PSNI in 2008, their use has increased to the point where Tasers were drawn or fired on almost 750 occasions in the last two years.

“Tasers are potentially lethal weapons, linked to hundreds of deaths in the USA and a growing number across the UK where they have been made increasingly available to police.

“In the UK, a total of 18 people have died after a Taser was discharged against them by police.

“Amnesty recognises that the police have a duty to protect the public and themselves from harm, but a further roll-out of Tasers would be a serious mistake for policing in Northern Ireland and the Policing Board should resist such calls. More Tasers would inevitably mean more mistakes, more misuse, more tragedy and consequent damage to community relations.”

Tasers: what are they?

Conductive Energy Devices (CEDs), or Tasers as they’re more commonly known, are powerful electrical weapons used by the police with the aim of subduing those they are used against. The pistol-shaped weapons use nitrogen gas to fire sharp darts which can penetrate 5cm of clothing, up to seven metres. 50,000 volts of electricity is then conducted down wires connecting the darts and the Taser gun. The electrical current is designed to cause acute disruption to muscles in the body with the supposed aim of incapacitating individuals. The electrical shocks and pulses are excruciatingly painful, and can often cause a person to fall to the ground, in some instances leading to serious injury especially when falling on hard surfaces or from a height.