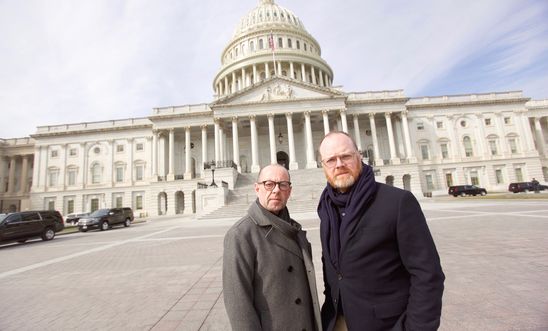 Freedom of the press in Northern Ireland is “at risk”, Amnesty International has warned, as two investigative journalists face further police questioning today related to their award-winning film about state collusion in the killing of civilians.

Trevor Birney and Barry McCaffrey were arrested last August after working on the documentary ‘No Stone Unturned’ that revealed new evidence about the 1994 Loughinisland massacre.

Six months on from their arrest, Amnesty has today launched a new campaign in support of the journalists, allowing people around the world to send messages of solidarity and raise concerns regarding freedom of the press in Northern Ireland.

“Amnesty is deeply concerned that the arrests of Trevor and Barry, and the seizure of documents and computer equipment, puts press freedom at risk in Northern Ireland.

“The arrest of two of the most widely-respected journalists in Northern Ireland has sent a shiver of fear through the region.

“When the police are arresting journalists who have investigated police collusion in the killing of civilians, rather than the killers and those who helped them get away with murder, people everywhere should be worried.”

Trevor Birney and Barry McCaffrey were arrested on August 31 in connection with an alleged breach of the Official Secrets Act, relating to confidential documents about the police investigation of the murder of six men in a bar in the village of Loughinisland, County Down, in 1994.

In August last year, an estimated 100 police officers from the Police Service of Northern Ireland and Durham Constabulary raided the journalists’ homes and offices, seizing documents and computers, which the men are fighting to have returned.