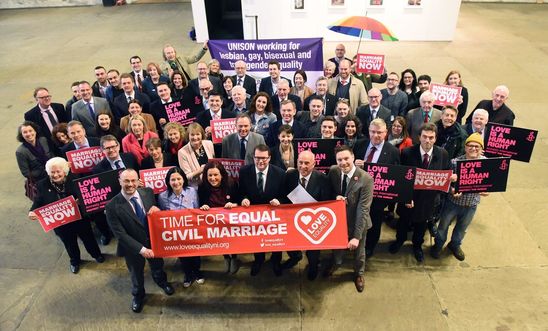 ‘This amendment respects the role of Stormont, but also recognises the reality that those devolved institutions are not currently functioning’ - Lord Robert Hayward

A Conservative peer has launched a fresh attempt to legislate for same-sex marriage in Northern Ireland with an amendment to the Civil Partnerships Bill which will be debated in the House of Lords on Friday (1 February).

Lord Robert Hayward, who introduced a Private Member’s Bill on the issue last year, has tabled an amendment to the Civil Partnerships, Marriages and Deaths Bill, which would extend same-sex marriage to Northern Ireland.

“This amendment respects the role of Stormont, but also recognises the reality that those devolved institutions are not currently functioning.

“Same-sex couples in Northern Ireland should not be asked to wait indefinitely for equality with the rest of the UK. It is time for Westminster to put right that wrong.”

“This is a welcome move from Lord Hayward. More than two years after the collapse of Northern Ireland’s devolved government, we need legislators at Westminster to secure equal marriage for all.

“If Stormont returns, we are happy to continue our work with MLAs across the parties to change the law, but meanwhile, equality can’t wait.”

In January 2017, both the Northern Ireland Executive and Assembly collapsed after Sinn Féin withdrew their support. Attempts to restore power-sharing have failed.

In November 2015, Members of the Northern Ireland Assembly voted to support equal marriage, but the measure was blocked by the Democratic Unionist Party which issued a Petition of Concern, a voting mechanism originally designed to protect the rights of minorities in Northern Ireland.

“In accordance with the Belfast Agreement, [marriage] is a devolved matter which should be addressed in the NI Assembly; but the power of the Westminster Parliament to legislate remains unaffected. If this issue were to be raised in Westminster, the Government’s policy is to allow a free vote on matters of conscience such as equal marriage.”

However, to date, the UK Government has refused to legislate or allocate parliamentary time for either of the two Private Members’ Bills which have been submitted to Parliament on equal marriage legislation.

A Sky News opinion poll in April last year showed 76% support for marriage equality amongst the Northern Ireland public. Meanwhile, Amnesty’s petition calling on Prime Minister Theresa May to introduce a bill to legalise equal marriage in Northern Ireland has more than 35,000 signatures.