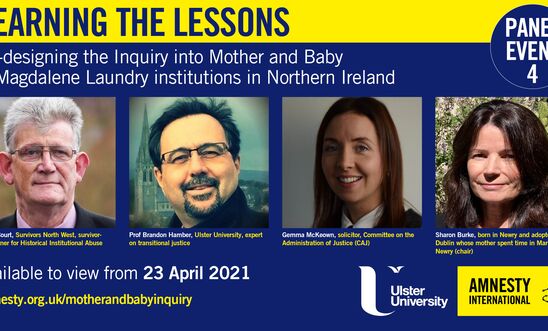 ‘Don’t suffer the same delays we experienced. Demand a redress process in tandem with an inquiry’ – Jon McCourt

The Northern Ireland Executive should set up a redress scheme to operate in parallel with a public inquiry into Mother and Baby and Magdalene Laundry institutions.

That’s the call of Jon McCourt, a leading campaigner for the historical institutional abuse inquiry (HIAI) in Northern Ireland, who says that Mother and Baby Home survivors should not be left to wait years for redress, as happened with HIAI victims.

“Compensation is part of a package of redress measures which the Executive can put in place to try to put things right.

“There’s no reason why a redress scheme should not be put in place alongside the inquiry, rather than survivors having to wait years for a scheme to be set up after the inquiry concludes and years more for it to pay it support to often very elderly people.

“My message to survivors is simple: don’t suffer the same delays we experienced. Demand a redress process in tandem with an inquiry.

“It is imperative that those affected living outside of this jurisdiction are treated equally when it comes to redress. There should be no territorial limitation on benefits exemption for redress payments.”

Mr McCourt was speaking at an information event for survivors, organised by Amnesty International and Ulster University, to help learn the lessons of past inquiries when designing the new investigation into Mother and Baby institutions in Northern Ireland.

“Learning lessons from previous inquiries is key to getting this one right for survivors of Mother and Baby and Magdalene Laundry institutions.

“We have a golden opportunity to put in place an inquiry, and other related support processes like redress, to meet the needs of victims and survivors. It is important that survivors get involved in the design of the inquiry now so that crucial decisions are not made without them.”

In January, the Northern Ireland Executive agreed to establish an investigation into the institutions, with the nature of the inquiry to be determined by survivors, including women who were sent to the institutions and the children to whom they gave birth.

The events are available to watch online at: amnesty.org.uk/motherandbabyinquiry