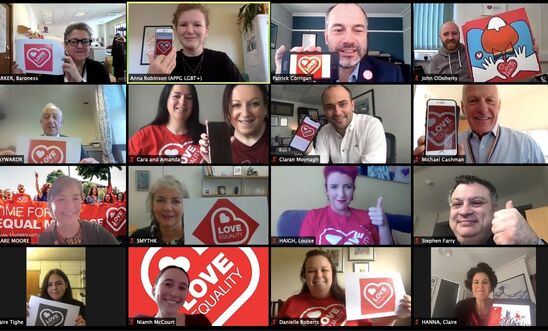 Marriage equality in Northern Ireland has finally been fully achieved, Amnesty International said today, as campaigners welcomed a law change that will enable more than 1,000 same-sex couples to convert their civil partnerships to marriages.

The law change happened with the introduction of new regulations in Parliament this morning by Northern Ireland Minister, Robin Walker. This is the final regulatory change necessary to permit full marriage equality in the region, following the historic legalisation of same-sex civil marriage (13 January), then same-sex religious marriage (1 September), which were secured after a long campaign by the Love Equality coalition.

The law change will come into force on 7 December, with the first civil partnership conversions expected to take effect on that date. Couples in civil partnerships will have a three-year window during which they can convert to married status through a simple administrative process. Fees will be waived during the first year.

“This law change is the final piece of the jigsaw in bringing marriage equality to Northern Ireland.

“It’s a huge day of celebration. We fought to change the law so it would cherish all couples and all families equally and now we have achieved that - first with civil marriage, then religious marriage and now finally, with civil partnership conversion.

“We want to thank all our supporters at Westminster and Stormont, including Ministers and officials, who helped us to deliver this change. And to all the couples, their families, friends and the wider community in Northern Ireland who gave this campaign unstoppable momentum – this win is yours.”

Cara McCann, Director of HereNI, a group which advocates for lesbian and bisexual women in Northern Ireland and a member of the Love Equality coalition, said:

“It is such a relief to get the last element of marriage equality legislation over the line. This means that people in civil partnerships, like my partner Amanda and I, can finally become the married couple we have always wanted to be. This change means so much to so many people here, as we can finally see that the law respects our relationships as equal.”

“This law change will allow over 1,000 same-sex couples currently in civil partnerships to convert to marital status if they wish. My partner, Martin, and I will be among them. The campaign for LGBT+ rights does not end with marriage, but the huge support we received from the general public on this issue shows that Northern Ireland demands equality for all.”