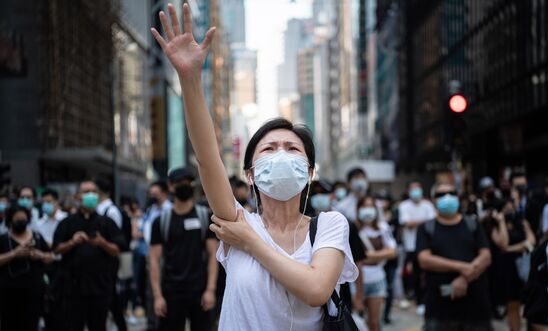 Amnesty International has written to Northern Ireland’s First and deputy First Minister to ask them to raise concerns with Chinese consul general Madame Zhang Meifang over the arrest of around 50 Hong Kong opposition figures for violation of the controversial national security law. One of those arrested, pro-democracy activist Gwyneth Ho, gave the Amnesty International Northern Ireland annual lecture last month.

“Just four weeks ago, Gwyneth Ho was a guest of Amnesty International members in Northern Ireland as she delivered our annual lecture.

“She told us then that she ‘lived under a constant threat of being arrested’.

“Now those fears have been realised, with the arrest of Ms Ho and 52 others in a ruthless crackdown on democracy and human rights by the Hong Kong authorities.

“We are asking the First and deputy First Minister to use their offices to contact the Chinese consul general in Belfast to voice their concerns at these arrests.

“We know that the Chinese consul general has previously discussed Hong Kong’s national security law with Arlene Foster and Michelle O’Neill. Now is the time for them to make clear their opposition to how this law has been weaponised to punish anyone who dares to exercise their right to freedom of expression.”

According to reports, they were charged with “subversion” over their organisation and participation in a self-proclaimed primary for last year’s Legislative Council election, which was later postponed.

According to a Chinese government report of a meeting in July 2020 between Arlene Foster, Michelle O’Neill and the Chinese consul general Madame Zhang Meifang, Northern Ireland’s first and deputy first minister said they “understand and respect” Hong Kong's draconian national security laws. The reference was subsequently deleted from the Chinese government website. The Northern Ireland Executive Office has refused requests to publish minutes of the meeting.