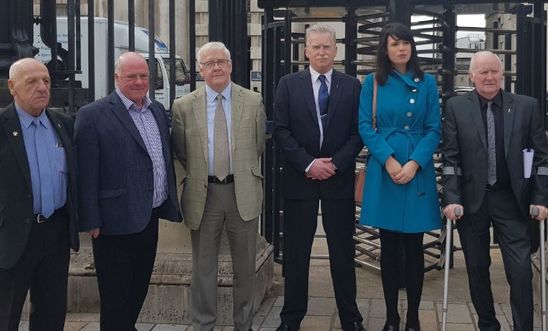 Francis McGuigan (third from left), with Grainne Teggart and other Hooded Men outside the Court of Appeal © Amnesty International

What: Belfast Court of Appeal to rule on Friday 20 September whether an investigation into criminal acts committed during the interrogation of the ‘Hooded Men’ should proceed

The Court of Appeal in Belfast will rule on Friday (20 September) whether an investigation into criminal acts committed during the interrogation of the ‘Hooded Men’ in Northern Ireland in 1971 should proceed.

The High Court in Belfast has previously ruled that the Police Service of Northern Ireland must investigate the unlawful treatment of the men. Mr Justice Maguire said in his judgment that the force’s decision to end its investigation into the case in 2014 was “seriously flawed” and that a “completely fresh decision process should begin”. He added it was “plain that the methods used were unlawful”.

Amnesty is an intervener in the case, the organisation’s first intervention in a legacy court case in Northern Ireland. Amnesty has backed the men’s campaign for justice for decades. The case is likely to set an important precedent for the investigation of serious human rights violations in this jurisdiction.

Ahead of the judgment, Francis McGuigan said:

“The High Court was right when it said there should be an investigation to identify and hold to account those Ministers, MOD and RUC officers who were responsible for authorising and carrying out torture on us.

“We hope the Court of Appeal will uphold this ruling. An investigation must be independent and must get underway without any further delay. We have been waiting for justice for nearly five decades.”

“It is utterly shameful that these torture victims have been denied justice for nearly half a century.

“It’s wholly unacceptable that no-one - not those who carried out the abuse nor those who authorised it - has ever been held accountable before the law. These men have been denied justice for too long. An independent, effective and human rights-compliant investigation into the torture of these men must be carried out without further delay.”