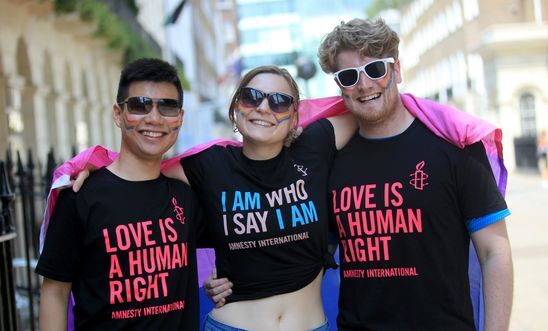 Northern Ireland legislation to ban so-called LGBT+ conversion therapy must include harmful religious practices, Amnesty International has said ahead of a debate at the Stormont Assembly tomorrow.

A motion brought by Ulster Unionist MLAs John Stewart and Doug Beattie calls on the Minister for Communities to commit to bringing forward legislation before the end of the current Assembly mandate to ban conversion therapy in all its forms. An amendment from DUP MLAs is seeking to exclude religious practices from any ban.

“In recent years, proponents of so-called conversion therapy have tried to hide their anti-LGBT+ views by representing these practices as being about mental health and religious liberty, often carried out in the context of pastoral care or prayer ministry.

“Being against bogus conversion practices is not a threat to religious freedom. Just last week, the UN Special Rapporteur on Freedom of Religion or Belief - the world's most senior authority on religious rights - said that attempts to change someone's sexuality or gender identity were ‘chilling’ and that a ban would not violate freedom of religion or belief under international law.

“’Praying the gay away’ is just as unacceptable as any other pseudoscientific approach which tells LGBT+ people they are ‘sick’ and ‘broken’ and can change their sexual orientation or gender identity.

“MLAs should not be distracted by spurious arguments and should ensure that any legislation not only covers the now, thankfully, rare conversion activity in healthcare settings, but addresses religious practices where demonstrable harm results.”