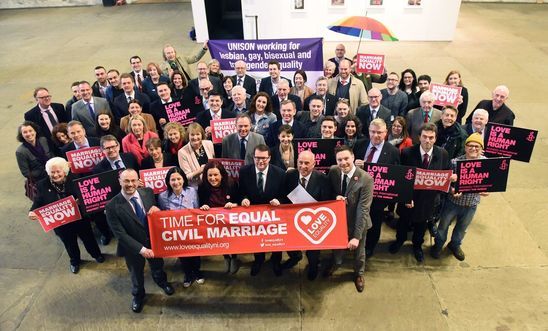 “We have worked with Conor McGinn on this amendment and we expect it to secure strong support, so that second-class citizenship for LGBT+ people in Northern Ireland can finally be ended.” – Patrick Corrigan

Campaigners for marriage equality in Northern Ireland have said they are working with a cross-party groups of MPs at Westminster to bring an amendment to the Commons next week, which could see equal marriage for the region become a reality in three months.

Activists from the Love Equality campaign for equal marriage, which wants the UK Government to extend same-sex marriage laws to Northern Ireland in the absence of a devolved government at Stormont, says it has been working with the group of Labour, Conservative, Liberal Democrat and Green MPs, led by Conor McGinn, the Northern Ireland-born MP for St Helen’s North.

McGinn has announced his intention to introduce an amendment to legislation expected in the Commons next week related to Northern Ireland’s budget and the statutory obligation on the Secretary of State to call an Assembly election if devolution has not been restored by late August.

The amendment will oblige the Secretary of State for Northern Ireland to introduce marriage equality to the region within three months of the Act becoming law, if devolution has not been restored by that point.

“With no Stormont government in place for almost two-and-a half-years, and the UK government refusing to extend equal marriage to Northern Ireland, we have been working with Labour MP Conor McGinn, Conservative Lord Robert Hayward, plus MPs and Peers from the main parties in Westminster to secure marriage equality legislation via the backbenches.

“We have worked with Conor McGinn on this amendment and we expect it to secure strong support, so that second-class citizenship for LGBT+ people in Northern Ireland can finally be ended.

“If devolved government returns within three months, then we will resume our campaign at Stormont. Meantime, Westminster should move to end this injustice. If the Assembly is restored at some point in the future, then members there can legislate as they see fit, but with a large majority of MLAs in favour of equal marriage, we know that there will be little appetite to see this measure overturned.”