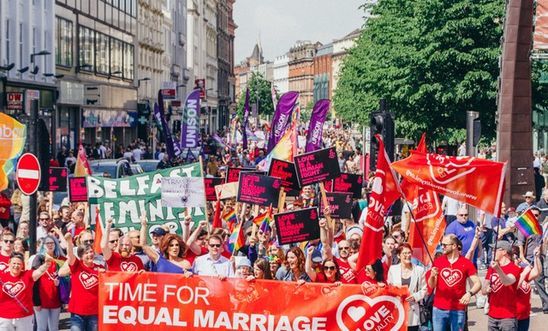 Equal marriage campaigners have called for the Northern Ireland Secretary of State to end the delay in allowing same-sex weddings in churches and the conversion of existing civil partnerships to marriages.

The call comes as Ireland marks the fifth anniversary of the successful marriage equality referendum and the announcement of the first demonstration march for equal marriage in Belfast organised by Amnesty International, the Rainbow Project and the Irish Congress of Trade Unions.

However, couples who wish to have a religious ceremony as part of their wedding, or who wish to convert their civil partnership to a marriage, are still not able to do so – the only part of the UK or Ireland where this is the case. Campaigners are calling on the Secretary of State to lay new regulations in Parliament and introduce these changes as a matter of urgency.

“We have already won an historic change to the law – now we need the Secretary of State to finish the paperwork which is blocking many couples’ big day.

“Julian Smith, when he was Secretary of State, pledged to deliver same-sex religious marriage by April and civil partnership conversion in the following months. We are now approaching the end of May and have seen no action from his successor Brandon Lewis.

“The LGBT community and their supporters have had to battle longer and harder to secure same-sex marriage than anywhere else on the UK or Ireland and we are not going to leave the job half done. No-one will be left behind in our fight for equality and the Secretary of State needs to end his ‘go slow’ in delivering the now overdue changes.”

“Five years ago, we celebrated the huge Yes vote for marriage equality in the South and we declared our intention to secure the same rights in Northern Ireland with first big march for equal marriage.

“That demonstration saw 20,000 people take to streets and the momentum from those days and many others since carried us forward to win a change in the law at Westminster. But no-one is equal until everyone is equal and the UK Government needs to finish the job which we started.”

The Rev Chris Hudson, the minister of All Souls Church, Belfast – a member of the Non-Subscribing Church of Ireland – says his counterparts in the rest of the UK and the Republic of Ireland can already officiate same-sex weddings and he now wants the same freedom of religion in Northern Ireland.

“Recently the Executive said they were allowing marriages to go ahead for terminally ill people during the present pandemic. I welcome this, but it still excludes same sex couples.

“A few years ago, a young lesbian couple asked me to perform a marriage service. Sadly, I could only carry out a wedding blessing because of the law. One of them was dying from cancer and was carried from her bed to sit in a chair as I blessed them. She died three weeks after the service in her house.

“The present situation must not be allowed to continue as it is deeply painful to same sex couples who are people of faith.”