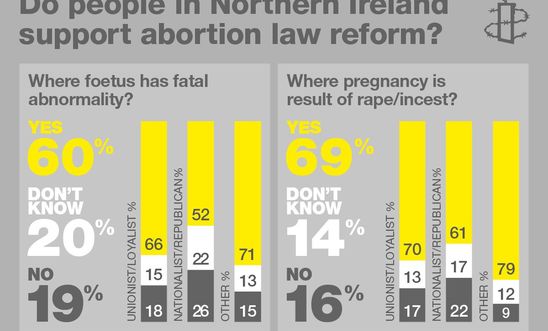 Proposed amendments to Northern Ireland’s law on abortion would be “important first steps” to bringing the region into line with international human rights standards and protecting women and girls’ fundamental rights, Amnesty International has said.

Members of the Northern Ireland Assembly have submitted proposals to allow for abortion in cases of fatal foetal diagnosis and where the pregnancy was as a result of rape or incest. The amendments to the Justice Bill are due to be debated and voted on at the Assembly tomorrow (Wednesday).

In December last year, Belfast’s High Court ruled that Northern Ireland’s abortion law is in breach of the European Convention on Human Rights by not allowing for terminations in such circumstances.

Amnesty has written to all Assembly members calling for Northern Ireland law to be brought into line with international human rights standards, including full decriminalisation of voluntary abortion, and access to safe and legal abortions, at a minimum, on grounds of severe or fatal foetal abnormality, or in circumstances where pregnancy is a result of rape or incest.

“We welcome moves to amend Northern Ireland’s abortion law, which is in desperate and urgent need of reform.

“These are important first steps to bringing Northern Ireland’s law into line with international human rights standards and we urge members of the Assembly to change the law, as called for in December’s High Court decision.

“In line with international standards, Amnesty recommends that the reformed law allows for abortions in cases of ‘severe and fatal foetal abnormality’ and that medical practitioners are allowed to decide whether a condition meets the necessary standard.

“With regard to sexual violence, Amnesty recommends that the law be changed to make abortion available to women and girls who have been raped, and that they should not be compelled to undergo unnecessary procedures, such as making a complaint to the police, identifying the rapist, pressing charges against the perpetrator, or providing forensic evidence. The World Health Organisation notes that such requirements can delay access to abortion services, or may prevent access to services altogether.

“We urge all members of the Northern Ireland Assembly to support changes to the law to ensure women’s and girls’ rights to health, and to be free from discrimination and cruel, inhuman and degrading treatment.”

Support has been growing for altering Northern Ireland’s strict abortion law, with seven out of ten people backing changes to permit terminations in the circumstances proposed under the draft amendments, according to an Amnesty International survey.

Key findings of the independent research, carried out by polling company Millward Brown Ulster, which polled 1,013 people in October 2014, showed that:

-       60% of people think the law in Northern Ireland should make access to abortion available where the foetus has a fatal abnormality;

-       69% of people think the law in Northern Ireland should make access to abortion available where the pregnancy is the result of rape or incest.