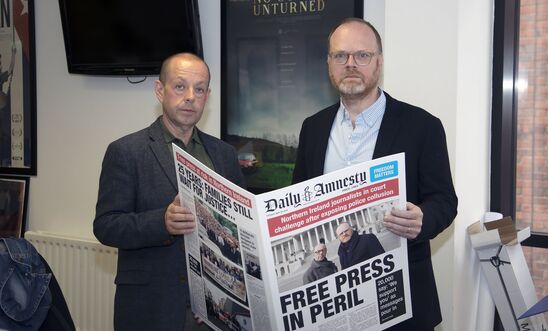 Amnesty to write to Policing Board to demand investigation into ‘debacle’

Amnesty International has welcomed today’s announcement of an agreement between Trevor Birney and Barry McCaffrey and the PSNI which will result in the deletion of data retained by the police and the awarding of substantial damages to the two investigative journalists.

Amnesty will now write to the Northern Ireland Policing Board to demand an investigation to ensure that those responsible are held accountable and to prevent similar cases of interference with press freedom in the future.

The agreement today in Belfast High Court followed an initial ruling in May 2019 and a full judgment in July 2020 which ordered the police to hand back files and other material seized in the raids ‘forthwith’. PSNI Chief Constable Simon Byrne subsequently made an unreserved apology to the two journalists and their families for the distress and upset caused by the police.

The two were arrested and questioned by police in August 2018 in connection with the 2017 documentary film ‘No Stone Unturned’ which investigated the Loughinisland massacre of 1994 and allegations of police collusion.

“This is a huge victory for press freedom and the fundamental principle of protecting journalists’ sources. Trevor Birney and Barry McCaffrey have successfully defended press freedom, not only on their own account, but on behalf of media across the UK.

“The police sought to undermine press freedom in Northern Ireland, as they have in the past by going after journalists such as Liam Clarke, Kathryn Johnston and Suzanne Breen.

“Time after time, the PSNI has chosen to tear up the rule book and ride roughshod over the principle of press freedom. Time after time, they have ended up making apologies and paying damages out of public money – but only after sending a chill through every newsroom in Belfast.

“The Policing Board must now take responsibility for addressing the fall-out of this debacle, which has caused huge harm to public confidence in policing in Northern Ireland, and between legal fees, court costs and damages, has cost millions of pounds to the public purse.

“Amnesty International will be writing to the Policing Board asking them to establish a thorough investigation into the circumstances of this troubling case. Those in senior positions within the police who took the decisions and gave the orders must be held accountable. Lessons must finally be learned.

“The day of dawn raids at the homes of journalists in Northern Ireland must be over.”

“Meanwhile, let us not forget that, while the police were trying to jail journalists, the killers who took the lives of six innocent people in Loughinisland remain free.

“Tragically, the bereaved families of Loughinisland are today not an inch closer to justice than 26 years ago, when the police promised they would leave ‘no stone unturned’.”

In a judicial review at Belfast High Court, Trevor Birney and Barry McCaffrey challenged the legitimacy of the search warrants used by police to carry out the raids. Both the Police Service of Northern Ireland (PSNI) and Durham Constabulary were involved in the criminal investigation.

The journalists were arrested and questioned by police in August 2018 in connection with the documentary film ‘No Stone Unturned’. They were arrested in connection with an alleged breach of the Official Secrets Act, relating to confidential documents about the police investigation of the murder of six men in a bar in the village of Loughinisland, County Down, in 1994.

In August 2018, it was estimated that up to 100 police officers from the PSNI and Durham Constabulary raided the journalists’ homes and offices, seizing documents and computers.

The pair were never charged but remained on bail for nine months. In June 2019, following the initial the High Court ruling, Durham Constabulary dropped the criminal investigation of the two journalists and the PSNI returned computers, phones, cameras, notebooks, files and other physical material seized.