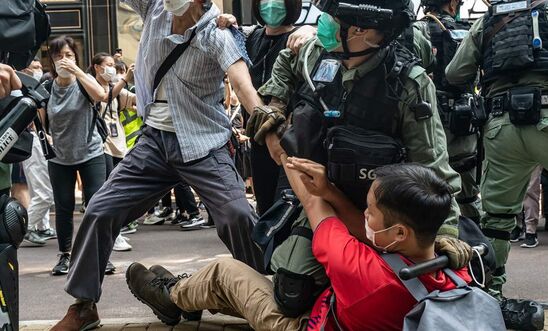 Amnesty International has criticised the Executive Office for refusing to publish a report of a meeting in late July between Arlene Foster, Michelle O’Neill and the Chinese consul general Madame Zhang Meifang, at which Northern Ireland’s first and deputy first minister said they “understand and respect” Hong Kong's draconian national security laws, according to a Chinese record of the meeting.

According to a Chinese government report of a meeting in late July between Arlene Foster, Michelle O’Neill and the Chinese consul general Madame Zhang Meifang:

“They said that the Northern Ireland government cherishes friendship with China, understands and respects Hong Kong's national security legislation, and sincerely wishes Hong Kong more prosperity and stability, and expressed that Northern Ireland is willing to further strengthen its cooperation with China in the epidemic.” The Chinese Consulate later removed the reference from its website.

The Executive Office is refusing to publish a record of the meeting, claiming it could harm relations between Northern Ireland and China, according to a report in the Belfast Telegraph newspaper.

“It is not appropriate for Northern Ireland’s First and deputy First Minister to hold what are effectively secret meetings with the Chinese government. The public has a right to know what is being said on our behalf to a government responsible for atrocious human rights abuses.

“The original Chinese report of this meeting recorded that Northern Ireland’s political leaders appeared to endorse their crackdown in Hong Kong and remained silent about the internment of a million Uighurs in Xinjiang, just days after footage emerged of hundreds of prisoners shackled and blindfolded on a train station platform.

“If the First and deputy First Minister did challenge these human rights abuses, we need clear evidence of that. The Northern Ireland Executive must publish its note of the meeting.

“We also now need a clear public condemnation from Arlene Foster and Michelle O’Neill of what the Chinese government is doing in Hong Kong and Xinjiang. Following this meeting, silence is no longer an option.”