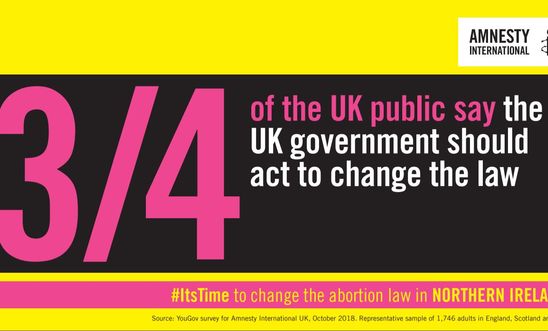 Amnesty International has today (10 October) published findings from a new set of opinion polls that reveal overwhelming support amongst the UK public for decriminalisation of abortion and law reform for Northern Ireland.

Amnesty’s polls analysed the attitudes of the Northern Irish and Great British public separately to gauge opinions about Northern Irish women being subjected to an abortion law that is amongst the most restrictive in the world. These are the first major surveys of public opinion on abortion reform in Northern Ireland since the Republic of Ireland voted to repeal the eight amendment in their referendum on abortion in May.

The results show high levels of public support for abortion law change, with 65% of adults in Northern Ireland agreeing that abortion should not be a crime, and 78% of British people in favour of decriminalisation. More than two-thirds of people in Northern Ireland and three-quarters of Brits – the equivalent of 75% of the UK public - think the UK Government should act to change the law.

There is high support for reform of Northern Ireland’s abortion law amongst people of all political persuasions: 67% of DUP voters questioned agreed that having an abortion should not be a crime and 65% think that Westminster should reform the law in the absence of a devolved government; 74% of Conservative voters think the UK Government should act to change the law, as do 78% of Labour voters.

Amnesty’s poll of people living in England, Scotland and Wales found that:

Amnesty’s survey of people living in Northern Irish revealed that:

“Our research shows landslide support for reform to Northern Ireland’s repressive abortion law. Every part of the UK agrees that abortion should be decriminalised and that Westminster should legislate for change.

“This confirms what we’ve long known - that most people in Northern Ireland and across the UK agree that it’s completely wrong for Northern Irish women to be governed by an archaic law that denies them their rights, health and autonomy.

“The results show that this is not a political or contentious issue, it’s fundamentally an issue of health, human rights, equality and dignity. Voters of all political backgrounds - including Labour, Conservative, Sinn Fein and DUP voters - are backing decriminalisation of abortion.

"The UK Government cannot ignore the overwhelming support for abortion law reform. It must listen to the people and put an end to the criminalisation of women and girls.”