Nigeria/UK/Netherlands: investigate Shell for complicity in murder, rape and torture 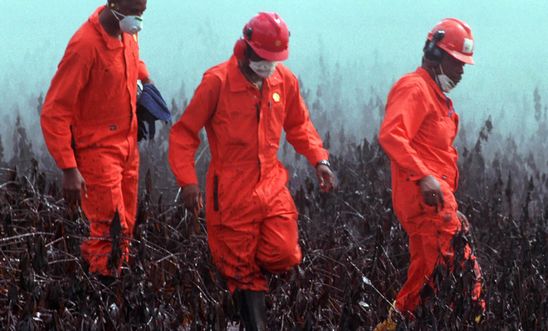 Amnesty International is calling on Nigeria, the UK and the Netherlands to launch investigations into Anglo-Dutch oil giant Shell, over its role in a swathe of horrific crimes committed by the Nigerian military government in the oil-producing Ogoniland region in the 1990s.

The organisation has released a ground-breaking review of thousands of pages of internal company documents and witness statements, as well as Amnesty’s own archive from the period.

The Nigerian military’s campaign to silence the Ogoni people’s protests against Shell’s pollution led to widespread and serious human rights violations, many of which also amounted to criminal offences.

“The evidence we have reviewed shows that Shell repeatedly encouraged the Nigerian military to deal with community protests, even when it knew the horrors this would lead to – unlawful killings, rape, torture, the burning of villages.

“In the midst of this brutal crackdown Shell even provided the military with material support, including transport, and in at least one instance paid a military commander notorious for human rights violations. That it has never answered for this is an outrage.

“It is indisputable that Shell played a key role in the devastating events in Ogoniland in the 1990s, but we now believe that there are grounds for a criminal investigation.

“Bringing the massive cache of evidence together was the first step in bringing Shell to justice.

“We will now be preparing a criminal file to submit to the relevant authorities, with a view to prosecution.”

The Nigerian government’s campaign against the Ogoni people culminated in the execution, 22 years ago, of nine Ogoni men, including Ken Saro-Wiwa, the writer and activist who led the protests.

The executions followed a blatantly unfair trial and sparked a global outcry.

In June 2017 the widows of four of the men filed a writ against Shell in the Netherlands, accusing the company of complicity in their deaths.

An individual or company can be held criminally responsible for a crime if they encourage, enable, exacerbate or facilitate it, even if they were not direct actors.

For example, knowledge of the risks that corporate conduct could contribute to a crime, or a close connection to the perpetrators, could lead to criminal liability.

Amnesty’s new report “A Criminal Enterprise?” makes the case that Shell was involved in crimes committed in Ogoniland in this way.

In the 1990s Shell was the single most important company in Nigeria.

During the Ogoni crisis, Shell and the Nigerian government operated as business partners, and had regular meetings to discuss the protection of their interests.

Internal memos and minutes from meetings show Shell lobbying senior government officials for military support, even after the security forces had carried out mass killings of protesters.

They also show that on several occasions Shell provided logistical or financial assistance to military or police personnel when it was well aware that they had been involved in murderous attacks on defenceless villagers.

Shell has always denied that it was involved in the human rights violations, but there has never been an investigation into the allegations.

Protests in Ogoniland were led by the Movement for the Survival of the Ogoni People (MOSOP), in response to years of Shell oil spills which had devastated the environment.

In January 1993 MOSOP declared that Shell was no longer welcome to operate in the region, forcing the company to leave temporarily citing security concerns.

While Shell publicly sought to downplay the environmental damage it had caused, internal documents reveal that senior staff knew MOSOP had a legitimate grievance, and were highly concerned about the poor state of pipelines.

On 29 October 1990, Shell requested “security protection” from an elite paramilitary police unit called the Mobile Police at its facility in Umuechem village, where peaceful protests were taking place.

Over the next two days, the Mobile Police attacked the village with guns and grenades, killing at least 80 people and torching 595 houses. Many of the bodies were dumped in a nearby river.

From at least this point on, Shell executives would have understood the risks associated with calling for intervention from the security forces. Despite this, there is clear evidence that Shell continued to do just that.

For example, in 1993, shortly after it had left Ogoniland, Shell repeatedly asked the Nigerian government to deploy the army to Ogoniland to protect a new pipeline which was being laid by contractors.

This resulted in the shooting of 11 people at a village called Biara on 30 April, and the shooting to death of a man at Nonwa village on 4 May.

Less than a week after the shooting at Nonwa, Shell executives had a series of meetings with senior government and security officials.

The minutes of these meetings show that, rather than raising concerns about the shootings of unarmed protesters, Shell was actively lobbying for the government and the security forces to allow them to continue work in Ogoniland – and was offering “logistical” help in return.

One internal company document reveals that on 3 March 1994, the company made a payment of more than $900 US dollars to the ISTF, a special unit created to “restore order” in Ogoniland.

This was just ten days after the Unit commander ordered the shooting of unarmed protesters outside Shell’s regional headquarters in Port Harcourt.

The document states that this payment was a “show of gratitude and motivation for a sustained favourable disposition towards [Shell] in future assignments.”

“On a number of occasions, Shell’s request to the government for help tackling what it termed the “Ogoni issue” was followed by a new wave of brutal human rights violations by the military in Ogoniland.

“It is difficult not to see causal links – or to suppose that Shell was not aware at the time how its requests were being interpreted.

“Sometimes Shell played a more direct role in the bloodshed – for example by transporting armed forces to break up protests, even when it became clear what the consequences would be.

“This clearly amounts to enabling or facilitating the horrific crimes that followed.”

On 13 December 1993, shortly after a coup had brought General Sani Abacha to power, Shell wrote to the new military administrator of Rivers State, naming specific communities where protests against the company had occurred and requesting assistance.

One month later, in January 1994, the government ordered the establishment of the ISTF.

Later that year the violence against the Ogonis reached its horrifying peak when the ISTF carried out raids on Ogoni villages, killing, raping, torturing and detaining people.

According to an Amnesty report released on 24 June 1994, some 30 villages had been attacked and “more than 50 members of the Ogoni ethnic group [were] reported to have been extra-judicially executed.”

The ISTF Commander boasted of these raids on television, and they were widely reported on.

In July that year, the Dutch ambassador told Shell that the army had killed some 800 Ogonis.

Ken Saro-Wiwa in the crosshairs

Internal Shell documents show that Shell’s then-Chairperson in Nigeria, Brian Anderson, had at least three meetings with General Sani Abacha in 1994-5, at the height of the Ogoni crisis.

On 30 April 1994, Anderson raised “the problem of the Ogonis and Ken Saro-Wiwa” describing the economic consequences of MOSOP’s opposition.

Ken Saro-Wiwa was already in the government crosshairs, and in raising him at this meeting Anderson recklessly encouraged action against him.

Anderson reported that he came away from the meeting with the sense that Abacha, “will intervene with either the military or the police.”

Indeed, within a month Ken Saro-Wiwa and other MOSOP leaders had been arrested, baselessly accused of involvement in the murder of four prominent traditional leaders, and detained incommunicado.

They were tortured and ill-treated in detention, before being found guilty in a sham trial and executed in November 1995.

Documents reviewed by Amnesty show that Shell knew that it was highly likely that Ken Saro-Wiwa would be found guilty and executed.

Still, it continued to discuss ways to deal with the “Ogoni problem” with the government.

It is hard to see how Shell was not encouraging, even endorsing, the government’s action against Ken Saro-Wiwa and others.

Amnesty is calling for investigations to be launched in the three relevant jurisdictions: Nigeria, where the crimes occurred, as well as the UK and the Netherlands, where Shell is headquartered.

“In his final words to the tribunal that convicted him, Ken Saro-Wiwa warned that Shell would face its own day in court. We are determined to make this happen.

“Justice must be done – for Ken Saro-Wiwa and for the thousands of others whose lives were ruined by Shell’s destruction of Ogoniland.”

Amnesty is calling for investigations to be launched in the three relevant jurisdictions: Nigeria, where the crimes occurred, as well as the UK and the Netherlands, where Shell is headquartered.

Internal company documents, including faxes, letters and emails sent between different Shell offices, show that responsibility for Shell’s actions during the Ogoni crisis do not solely rest with staff based in the country.

These documents demonstrate that at all times, Shell’s directors based in The Hague and London were fully aware of what was happening in Nigeria.

One memo refers to the directors’ approval of a detailed strategy drawn up by Shell Nigeria in December 1994 for how the company should respond to criticism in the wake of the Ogoni protests.

In March 1995 Shell executives in London had a meeting with representatives of the Nigerian military in London, at which they agreed to “meet from time to time” to share information.

“The allegations cited in your letter against [Royal Dutch Shell] and [Shell Nigeria] are false and without merit.

“[Shell Nigeria] did not collude with the military authorities to suppress community unrest and in no way encouraged or advocated any acts of violence in Nigeria.

“In fact, the company believes that dialogue is the best way to resolve disputes.

“We have always denied these allegations, in the strongest possible terms.”