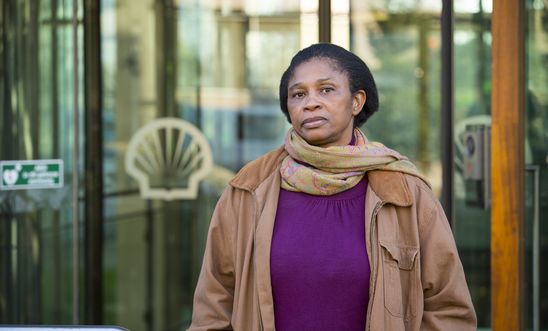 A writ has been served in a Dutch court accusing oil giant Shell of complicity in the unlawful arrest, detention and execution of nine men who were hanged by Nigeria’s military government in the 1990s, Amnesty International can reveal today (June 29).

The civil case has been brought by Esther Kiobel, the widow of Dr Barinem Kiobel, and three other women whose husbands were also executed. Esther Kiobel has battled Shell for 20 years over the death of her husband, who was hanged in 1995 along with the writer and human rights activist Ken Saro-Wiwa, and seven other men, collectively known as the ‘Ogoni Nine’. At the time, the executions sparked a global outcry.

Amnesty International supported Esther’s legal team to bring the case to the Netherlands, and has today released a new briefing, “In The Dock”, which exposes the role played by Shell in the executions.

“The executions of the Ogoni Nine shocked the world. Shell has been dodging accountability for its complicity in these deaths for more than 20 years but now, thanks to Esther Kiobel’s determination and bravery in taking on this corporate Goliath, the past is finally catching up with it.

“Today is a watershed moment in Esther Kiobel’s uphill battle for justice. Shell has to answer for the bloody footprints it left all over Ogoniland.”

The executions were the culmination of a brutal campaign by Nigeria’s military to silence the protests of the Movement for the Survival of the Ogoni People (MOSOP), led by Ken Saro-Wiwa. MOSOP said that others had grown rich on the oil that was pumped from under their soil, while pollution from spills and gas flaring had “led to the complete degradation of the Ogoni environment, turning [their] homeland into an ecological disaster.” In January 1993, MOSOP declared that Shell was no longer welcome to operate in Ogoniland.

Shell and the Nigerian government were business partners in operating wells across the Niger Delta. At the time of the executions, Shell pumped almost one million barrels of crude oil a day in Nigeria, roughly half of the country’s total daily oil production. Nigeria’s oil exports made up around 96% of the country’s foreign earnings.

Just weeks before the men were arrested, the Chairperson of Shell Nigeria had met with then-president General Sani Abacha, and raised “the problem of the Ogonis and Ken Saro-Wiwa”. This was not the first time Shell had engaged with military and security forces to frame the Ogoni protests as a “problem”. Shell also repeatedly reminded the authorities of the economic impacts of the MOSOP protests.

“Shell encouraged the government to stop Ken Saro-Wiwa and MOSOP, knowing this was highly likely to result in human rights violations being committed against them. Shell had plenty of evidence that the Nigerian military was responding to the Ogoniland protests with abuse.

“Even after the men were jailed, suffering from mistreatment and facing an unfair trial and the likelihood of execution, Shell continued to discuss ways to deal with the ‘Ogoni problem’ with the government rather than expressing concern over the fate of the prisoners. Such conduct cannot be seen as anything other than endorsement and encouragement of the military government’s actions.”

In May 1994, four Ogoni chiefs known to be opponents of MOSOP were murdered. Without presenting any evidence, the government blamed MOSOP and arrested scores of people, including Ken Saro-Wiwa and Barinem Kiobel. Kiobel was not a member of MOSOP, but held a senior government position and had been critical of the military’s actions in Ogoniland. He said he had tried to stop the murders – a version of events that was supported by evidence presented at his trial. Amnesty International considered Ken Saro-Wiwa and Barinem Kiobel both as Prisoners of Conscience, detained and ultimately killed for their peacefully held views.

After the arrests, at least two prosecution witnesses came forward to say that they had been bribed by the government to incriminate the accused, including with offers of jobs at Shell, and that Shell’s lawyer was present when they were bribed. Shell has always denied these claims.

Many of the Ogoni men arrested on suspicion of involvement in the murder of the four chiefs suffered repeated torture and other ill-treatment while detained. Even after the start of the trial, the military commander responsible for the incarceration allowed consultations between defendants and their lawyers only by prior arrangement with him, and usually only in his presence. Relatives said they were assaulted by soldiers when trying to visit the defendants.

Esther Kiobel has alleged that, while visiting her husband in prison, she was assaulted by a military commander and spent two weeks in detention where she was denied food and water.

On October 30-31,1995, the Ogoni Nine were convicted and sentenced to death. At the time Amnesty International and others raised serious concerns about the trial, describing it as politically motivated and biased. A British criminal lawyer who observed the trial said he believed “that the Tribunal first decided on its verdict and then sought for arguments to justify them. No barrel was too deep to be scraped”. He also said that the evidence was consistent with the claim that Barinem Kiobel was trying to stop the violence.

On November 10, the men were hanged and their bodies dumped in an unmarked grave.

Esther Kiobel is bringing a civil case along with Victoria Bera, Blessing Eawo and Charity Levula, whose husbands were also executed. The claimants are demanding damages for harm caused by Shell’s unlawful actions, and a public apology for the role that Shell played in the events leading to the deaths of their husbands.

“Esther Kiobel has lived in the shadow of this injustice for more than 20 years, but she has refused to let Shell silence her. Today her voice rings out on behalf of so many others whose lives have been devastated by the oil industry in Nigeria.

“The stakes in this case could not be higher - it could put an end to decades of impunity for Shell, whose name has become synonymous with the power of big corporations to trample over human rights without fear of retribution.”

Shell's complicity in the executions

Amnesty’s new briefing paper, ‘In The Dock’, exposes how Shell was complicit in the execution of the Ogoni Nine in a number of ways:

Internal Shell documents seen by Amnesty International reveal that the company knew that the trial of the Ogoni Nine was unfair, and was informed in advance that Ken Saro-Wiwa was highly likely be found guilty.

Nevertheless, the company maintained a close relationship with the Nigerian government, and even offered to help Ken Saro-Wiwa, if he “softened his stance” on the company.

“Shell’s version of events suggests it believed that Ken Saro-Wiwa - arrested, beaten, facing trumped up charges and an unfair trial that was set to see him sentenced to death - would be induced to help Shell out in return for some humanitarian aid.

“Shell’s version is frankly implausible. If true, it reveals a level of corporate self-interest that defies belief.”

After her husband’s death, Esther Kiobel fled to Benin in fear for her life, and in 1998 she was granted asylum in the United States, where she still lives.

“The dangerous liaison between Shell and the Nigerian government has never been properly investigated. Decades after the horrific chain of events that led to the hanging of the Ogoni Nine, there are still huge unanswered questions hanging over Shell.

“It is time to shine a spotlight into these dark corners of Shell’s past. Nothing can bring back the lives lost but here is a chance to send the message that no company, however big, however powerful, can evade justice forever.”

Amnesty International presented the above allegations to Shell. Shell’s global headquarters did not provide a substantive response. Shell Nigeria stated that:

“The allegations cited in your letter against [Shell] are false and without merit.  [Shell Nigeria] did not collude with the military authorities to supress community unrest and in no way encouraged or advocated any act of violence in Nigeria….We have always denied these allegations in the strongest possible terms.”

Esther Kiobel first filed a case against Shell in New York in 2002, but in 2013 the US Supreme Court ruled that the US did not have jurisdiction, without hearing the substance of the case. This is the first time that Shell is being taken to court over these issues in the Netherlands-  its home jurisdiction.

In the 1990s Shell in Nigeria was a wholly owned subsidiary of Royal Dutch/Shell (they later merged), and its operations were overseen by a management structure known as the Committee of Managing Directors (CMD) based in Europe.