Nigeria: No justice for the 640 men and boys slain by military following Giwa barracks attack two years ago 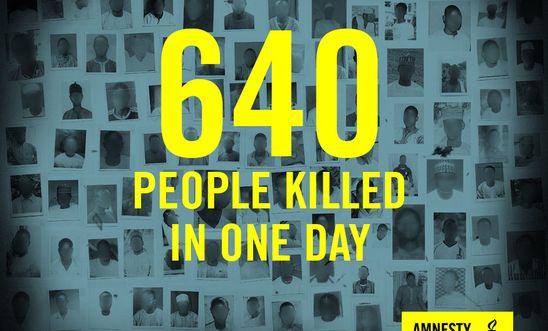 Two years after at least 640 recaptured detainees were slaughtered by soldiers of the Nigerian Army, the authorities have failed to conduct an effective, impartial and independent investigation into the killings, said Amnesty International.

The detainees – men and boys, many arbitrarily arrested in mass screening operations - were killed after they fled the barracks in Maiduguri, Borno state on 14 March 2014 following a Boko Haram attack. The majority were shot. The others had their throats cut. To mark the anniversary of this massacre, Amnesty campaigners will gather outside Nigerian embassies around the world to call for independent investigations and prosecutions.

Protests will take place outside Nigeria embassies across a number of countries including the UK, the Netherlands, Spain and Ghana. The London action will take place at 9.30am outside the Nigeria High Commission in central London.

“It is shocking that two years after these horrific killings there has been no justice for the victims and their relatives.

“The lack of an independent investigation has meant that no one has been held to account for the killings, strengthening an already pervasive culture of impunity within the military.”

Amnesty has extensively documented the events of 14 March 2014, interviewing dozens of witnesses, verifying video evidence of the killings and their aftermath and confirming the locations of mass graves through satellite imagery.

In June 2015 Amnesty published extensive evidence of war crimes and possible crimes against humanity committed by the Nigerian military. The report found that the military extra-judicially executed at least 1,200 men and boys, and almost certainly many more, between 2012 and 2014.

A further 7,000 detainees died in military detention as a result of starvation thirst, disease, torture and a lack of medical attention. Torture is routinely and systematically used by security forces in Nigeria, both during arrest and in detention. Soldiers arbitrarily arrested more than 20,000 suspects since 2011 and detained the overwhelming majority of them without access to their families or lawyers, without formal charges and without ever bringing them to court.

Amnesty has repeatedly called on the Government of Nigeria to initiate independent and effective investigations into its evidence of crimes under international law and to implement critical safeguards against human rights violations.

Yet, despite repeated promises by President Buhari and his government that Amnesty’s report would be looked into, no concrete steps have been taken to begin independent investigations. Many safeguards remain absent, for example suspects continue to be held in military detention without access to their lawyers or families, without charge and without being brought before a judge.

After more than nine months in office, President Buhari must take urgent action to provide justice for the conflict’s thousands of victims and prevent such violations occurring again.

“In the two years since the Giwa killings, the pattern of unjustified use of lethal force by the military has continued with no one held accountable,” said Netsanet Belay.

“From Giwa to Zaria, from the north east to the south east, the time has come to break the cycle of impunity that has gripped Nigeria. This should start with justice for the Giwa 640.”

Protest actions will take place outside Nigeria embassies across a number of countries including the Netherlands, Spain and Ghana as well as the UK.

Amnesty has consistently documented and condemned human rights abuses and violations by armed group Boko Haram and the Nigerian military, including publishing reports each year since 2012. In April 2015, Amnesty published a report which found that Boko Haram has committed war crimes and crimes against humanity.  It called on Boko Haram to end its campaign of violence against civilians and on the government to bring Boko Haram members to justice.

Amnesty published evidence of the killing of recaptured detainees after the Giwa barracks attack in a report on 31 March 2014.  The report was based on dozens of interviews with residents, lawyers, human rights defenders and hospital staff in various locations in and around Maiduguri. The report also included satellite imagery analysis that confirmed the existence of several mass graves that appeared in the area shortly after the executions.

On 5 August 2014, Amnesty published analysis of a shocking video evidence of soldiers cutting the throats of re-arrested detainees outside Maiduguri after the Giwa barracks attack.

Amnesty is calling on the government to launch a comprehensive independent, impartial and effective investigations into crimes under international law. Specifically, Amnesty is calling for the establishment of an independent and effective investigative panel to examine evidence against individuals suspected of crimes under international law and to prepare cases for prosecution by an independent prosecutorial authority. Secondly, the government must ensure further reform of the military’s operating procedures to ensure non-recurrence of such violations. Lastly, the government must work with the National Assembly to bring Nigeria’s domestic laws into line with international human rights standards.

Amnesty International’s report - Stars on Their Shoulders. Blood on Their Hands. War crimes committed by the Nigerian military - 3 June 2015: https://www.amnesty.org/en/latest/news/2014/08/nigeria-gruesome-footage…