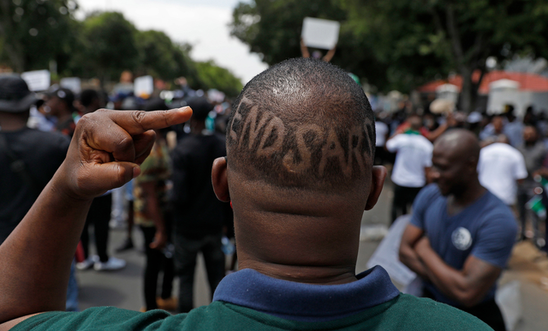 UN and African Union called on to intervene

Social media has been vital in protest campaigns like #EndSARS

Dozens of human rights and civil society groups have demanded an end to the Nigerian government’s ongoing blocking of Twitter in the country.

The groups - including Amnesty International, the African Centre for Media & Information Literacy, and Environmental Rights Action/Friends of the Earth, Nigeria - have also condemned a “directive” issued by the Nigerian Broadcasting Commission for all broadcast stations to deactivate their Twitter accounts.

On 4 June, Nigeria’s Ministry of Information and Culture announced a ban on Twitter and directed internet service providers in the country to block access to the site. The move came after a tweet by President Muhammadu Buhari’s was deleted by Twitter.

The Nigerian authorities are also intending to force social media platforms to register in Nigeria and comply with local regulations before they are licensed to operate. Other planned restrictions include legislative bills (the “Hate Speech Bill and “Social Media Bill”) which could see severe punishments, including the death penalty.

Social media platforms have played a significant part in campaigns for justice and accountability in Nigeria in recent years, notably #EndSARs protests last year. The coalition of civil society groups say they are “seriously concerned” at an escalating crackdown on human rights by the Nigerian government - particularly the rights to freedom of expression, access to information and media freedom - and they “strongly condemn the arbitrary and unlawful” suspension of Twitter.

The suspension of Twitter is inconsistent and incompatible with the Nigerian Constitution of 1999 and the country’s international human rights obligations - including under the International Covenant on Civil and Political Rights, and the African Charter on Human and Peoples’ Rights.

*Immediately withdraw the directive to broadcast stations to deactivate their Twitter accounts.

*End widespread impunity for human rights violations, in particular the right to freedom of expression