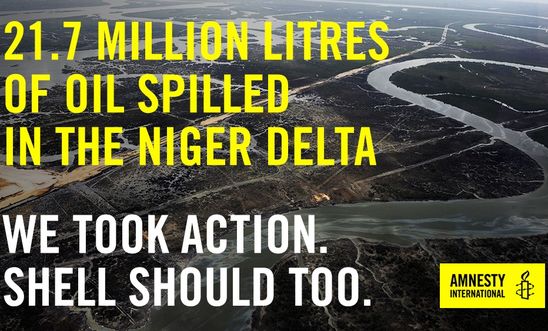 A groundbreaking research project by Amnesty International has exposed evidence of serious negligence by oil giants Shell and Eni, whose irresponsible approach to oil spills in the Niger Delta is exacerbating an environmental crisis.

Through an innovative network of crowdsourced data analysis, Amnesty found that Shell and Eni are taking weeks to respond to reports of spills and publishing misleading information about the cause and severity of spills, which may result in communities not receiving compensation.

The Decoders network is a platform developed by Amnesty to crowdsource human rights research, enlisting thousands of supporters and activists to study data about oil spills in the Niger Delta. Their findings, Decode Oil Spills, were then analysed by Amnesty’s researchers and verified by Accufacts, an independent pipelines expert.

“Shell and Eni claim they are doing everything they can to prevent oil spills - but Decoders’ research suggests otherwise.

“They found that the companies often ignore reports of oil spills for months on end - on one occasion Eni took more than a year to respond. The Niger Delta is one of the most polluted places on earth and it beggars belief that the companies responsible are still displaying this level of negligence.

“Adding insult to injury is the fact that Shell and Eni seem to be publishing unreliable information about the cause and extent of spills. The people of the Niger Delta have paid the price for Shell and Eni’s recklessness for too long. Thanks to Decoders, we’re a step closer to bringing them to account.”

Amnesty is now calling on the Nigerian government to re-open investigations into 89 oil spills.

Decoders collected information about the contents of the reports that Shell and Eni publish each time they visit the site of an oil spill. These reports detail the likely cause, location and extent of the damage, and are often accompanied by photographs. They are important because companies pay compensation to affected communities based on this information.

Previous research by Amnesty has revealed that the information in these reports is often inaccurate. For example, Shell massively understated the amount of oil spilt in the fishing town of Bodo between 2008 and 2009. With the help of Amnesty, the Bodo community eventually took legal action, forcing Shell to admit the real amount and pay £55 million in compensation.

To help other communities like Bodo, Amnesty needed to analyse masses of publicly available data about oil spills, and enlisted activists from around the world to help.

A total of 3,545 people, from 142 countries, took part in Decode Oil Spills. They answered 163,063 individual questions about reports and photographs, and worked a total of 1,300 hours - the equivalent of an individual working full-time for eight months.

Shell and Eni claim that most oil spills in Nigeria are caused by theft and sabotage. This claim is contested by communities in the Niger Delta, who stand to lose compensation if the companies attribute spills to third party activity. Previous research by Amnesty has exposed cases where the companies have wrongly labelled spills.

For these reasons, Amnesty asked Decoders to review and describe all the photographs of spills published by Shell and Eni, and to highlight anything that looked unusual. They identified at least 89 spills (46 Shell, 43 Eni) about which there are reasonable doubts surrounding the cause provided by the oil companies.*

For example, Decoders highlighted photos where spills which appear to have been caused by corrosion were attributed to theft. If confirmed, this could mean that dozens of affected communities have not received the compensation that they deserve.

2. Shell and Eni are not responding quickly enough to reports of spills

Nigerian government regulations require companies to visit the site of a spill within 24 hours of first reporting it.

Analysis of company documents shows that Shell responded within 24 hours of a spill occurring on only 26% of occasions, compared to Eni which did so on 76% of occasions. The data also shows that Shell’s response to spills has become slower over time, even though the number of spills it is reporting has reduced. On one occasion, it took 252 days to visit the site of a leak.

“The government regulations are there for a reason. The longer companies take to respond to spills, the higher the risk of oil spreading into food and water sources, and Shell knows this. There’s no way they’d be so irresponsible if their oil was seeping into European land.”

By far the slowest response was recorded when Eni took an incredible 430 days to respond to one spill in Bayelsa state. Eni told Amnesty that the delay was caused by the local community refusing to give it permission to visit the site, although this information was not reported at the time. When the company finally showed up, it calculated the amount of oil spilled by measuring the area that was visibly contaminated - amounting to four barrels.

Amnesty consulted pipeline experts Accufacts, who verified that this figure is not credible, highlighting the problem with the way spills are measured.

“Eni’s risible claim that just four barrels of oil were spilled over the course of a year demonstrates the urgent need for better regulation. Oil that spreads into swampland and rivers quickly becomes invisible, but this does not mean it becomes harmless. A quick visual assessment is not an accurate measurement of pollution, and it’s likely that this approach is resulting in understatement across the board.

“We consider Shell and Eni to be deliberately reckless and therefore wilfully negligent in their operations in Nigeria - their failure to operate in line with Nigerian law and best practice standards is having a devastating impact on the human rights of Niger Delta communities.

“Decoders is people power at its best. By giving just a few minutes of their time, activists are helping us hold these oil giants to account.”

Amnesty will present the findings of Decode Oil Spills to the government of Nigeria, calling on it to significantly strengthen its regulation of the oil industry. This includes making sure that the government oil spills agency (NOSDRA) has the tools to ensure that the companies are taking all reasonable steps to prevent and clean up spills.

The home states of Shell and Eni - the UK, the Netherlands and Italy - also have important roles to play. They should step up support for the Nigerian government and require by law that extractive companies whose headquarters are in their country undertake human rights due diligence measures.

*Amnesty International only treated answers about cause as verified when the majority of Decoders reached the same conclusion.

Prior to publication, Amnesty wrote to Eni and Shell and provided them with an opportunity to respond to the findings. The organisation reviewed the company responses in detail and took appropriate account of information provided in updating its findings. Shell stated that Amnesty’s allegations are false, without merit and fail to recognise the complex environment in which it operates. Eni said that it rejected the findings that it was failing to take prompt steps to prevent pollution, or providing unreliable or misleading information.

The letters of response from Shell and Eni are available here: https://amnesty.box.com/s/7uc34ytia39xsilrv125jfwnazlggpph