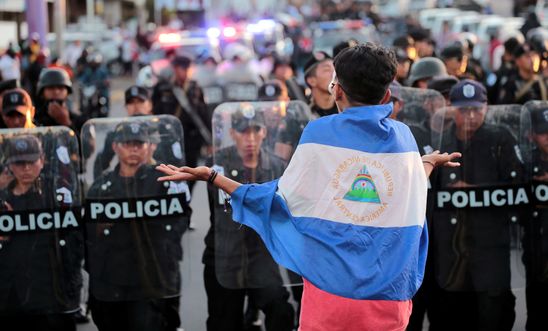 Tomorrow marks one year since Nicaragua’s violent crackdown on protests over social security reforms began. Ahead of the anniversary, Amnesty International is reiterating its call for an immediate end to the Nicaraguan government’s strategy of repression.

On 18 April 2018, a series of social security reforms triggered widespread social protests across Nicaragua. In response to these demonstrations, the Nicaraguan government adopted a strategy of violent repression. At least 325 people have since been killed, primarily by state security forces and pro-government armed groups; more than 2,000 have been injured; hundreds have been arbitrarily detained; and tens of thousands have been forced to flee to Costa Rica.

“Throughout the last year, the government of President Ortega has brutally and repeatedly repressed anyone who dares to stand up to his administration. The Nicaraguan authorities continue to violate the rights to justice, truth and reparation of hundreds of victims, while also preventing civil society organisations and international human rights monitors from working freely in the country. This has got to stop.

“The Nicaraguan government must put an immediate end to its strategy of repression and release all the students, activists and journalists detained solely for exercising their rights to freedom of expression and peaceful assembly.

“Amnesty International will continue to stand with all those who are peacefully fighting for their rights, despite the constant harassment and intimidation they face from the state security forces and pro-government armed groups that have committed grave human rights violations and crimes under international law. The brave people of Nicaragua will not be silenced.”

Amnesty and other international organisations have documented cases of serious human rights violations and crimes under international law, including torture and extrajudicial executions carried out by pro-government armed groups and members of Nicaragua’s National Police.

The Nicaraguan government has also expelled the Office of the High Commissioner for Human Rights (OHCHR), the Interdisciplinary Group of Independent Experts (GIEI) and the Special Monitoring Mechanism for Nicaragua (MESENI) from the country; cancelled the legal status of local civil society organisations; and continued to harass journalists and human rights defenders.