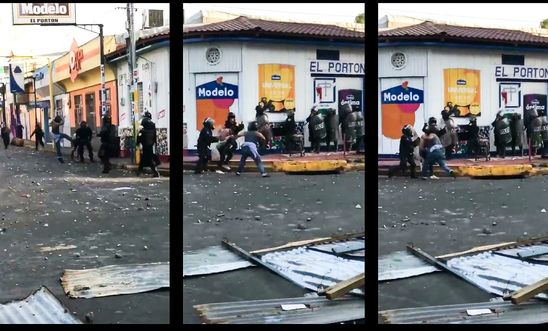 “The Nicaraguan authorities have turned on their own people in a vicious, sustained and frequently lethal assault” - Erika Guevara-Rosas

The Nicaraguan authorities have adopted a strategy of repression to crush recent protests in which at least 81 people have been killed, Amnesty International said in a new report released today (29 May).

On 18 April, demonstrations, mostly led by students, began in response to the benefit cuts and increases in worker and employer social security contributions. As of 28 May, 81 people had been killed, 868 injured and 438 arrested amidst the state’s heavy-handed and highly-coordinated response to the protests.

In its 36-page report - Shoot to kill: Nicaragua’s strategy to suppress protest - Amnesty reveals the lethal strategy carried out by authorities against the protests, including excessive use of force, possible extrajudicial executions, attempts to control the media and the use of pro-government armed groups.

An Amnesty investigation in Nicaragua from 2-13 May was able to verify reports of human rights violations in the cities of Managua, León, Ciudad Sandino and Estelí. The report is based on more than 30 in-depth interviews; 16 cases studies, including nine killings; review of dozens of testimonies and documentation by local organisations; technical examination and corroboration of video and photographic evidence; and analysis by firearms and munitions experts.

The report documents the Nicaraguan police’s use of lethal weapons, the large numbers of people injured by firearms, the trajectory of shots fired, the concentration of bullet wounds in the head, neck and chest of those killed, and apparent attempts to obstruct justice and cover up the nature of the killings. These patterns suggest a strong probability that police and pro-government armed groups committed multiple extrajudicial executions.

In one case, on 20 April, Juan Carlos López and Nelson Tellez were both shot in the upper chest while walking through Ciudad Sandino, where a protest was taking place. Juan Carlos died in hospital that day, while Nelson lived until 2 May. Before he died, Nelson told his wife that he recognised the man who shot them both as a member of the national police force who was stationed in Ciudad Sandino, although he was wearing civilian clothes at the time.

In an interview with Amnesty, Dr. Vilma Núñez, director of the Nicaraguan Centre for Human Rights, said: “the police began firing rubber bullets, but the violence escalated the next day. On 19 April there were several deaths. Daniel [Ortega] could have stopped the repression that day, but he did not. The next day the police fired live rounds. The order was to kill.”

Amnesty found that on 20 April at least three public hospitals refused to treat people who were gravely injured during the demonstrations, including 15-year-old Álvaro Conrado, who was shot while handing out water to protesters. Security guards allegedly denied Álvaro access to the Cruz Azul public hospital and he died later that day at the private Bautista hospital. Staff there told Amnesty that he could have survived if he had been treated sooner.

The strategy for repression appears to have been directed from the highest levels of government. President Daniel Ortega and Vice-President Rosario Murillo repeatedly demonised demonstrators and denied that people were being killed, while public officials denied victims medical attention, mishandled evidence and refused to order autopsies and other forensic examinations.

The use of pro-government armed groups, also known as “Sandinista mobs,” has played a key role in the suppression of demonstrations, with authorities allowing them to attack protesters, incite violence and spread fear among the population.

During the first weeks of the crisis, the authorities also violated the public’s right of access to information by blocking the transmission of four television networks that were covering the protests. A radio station was burned down, at least a dozen journalists were robbed, threatened or attacked, and one reporter, Ángel Gahona, was shot dead while broadcasting live in the coastal city of Bluefields.

Remorseless treatment of the victims and their families

The report documents several cases in which the authorities blocked the autopsies of people killed in the protests, and conditioned the release of their bodies on relatives signing waivers affirming that they would not file complaints. Several families of victims said police threatened and harassed them to dissuade them from speaking out or pressing charges.

“The Nicaraguan authorities have turned on their own people in a vicious, sustained and frequently lethal assault on their rights to life, freedom of expression and peaceful assembly. The government of President Ortega has then shamelessly tried to cover up these atrocities, violating the victims’ rights to truth, justice and reparation.

“The state must immediately stop repressing protesters and respect their right to criticise public policies. Instead of criminalising the victims, the authorities must launch a prompt, impartial and effective investigation.

“The authorities’ remorseless treatment of the victims and their families makes clear their contempt for those who dare to stand up to them. But despite the government’s cruel and calculated efforts to suppress dissent, the brave people of Nicaragua have shown that they will not be silenced.”

Amnesty is calling on President Ortega, as head of state and supreme chief of the national police force, to put an immediate end to the violent repression of demonstrators, the intimidation and harassment of victims’ families, and the stigmatisation of protesters.

The Nicaraguan authorities should also allow the establishment of a commission of independent experts to guarantee a prompt, independent and exhaustive investigation into possible extrajudicial executions and other human rights violations, including those allegedly committed by pro-government armed groups.