NGO's 'being bullied into silence' around the world - new report 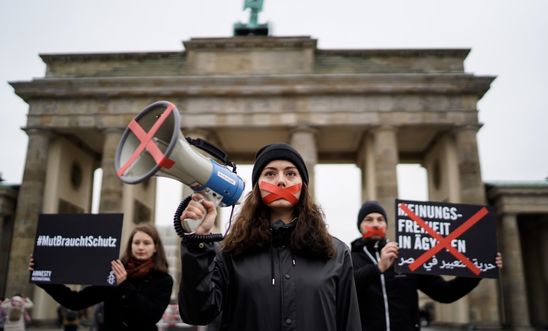 Repressive policies of the Russian government have caused a ripple effect

Governments across the world are increasingly attacking non-governmental organisations (NGOs) and ‘bullying them into silence’ by creating laws that subject them and their staff to surveillance, nightmarish bureaucratic hurdles and the ever-present threat of imprisonment, Amnesty said in a new report released today (21 February).

The 57-page report - Laws Designed to Silence: The Global Crackdown on Civil Society Organisations - reveals the startling number of countries that are using bullying techniques and repressive regulations to prevent NGOs from doing their vital work. The report lists 50 countries worldwide where anti-NGO laws have been implemented or are in the pipeline.

“We documented how an increasing number of governments are placing unreasonable restrictions and barriers on NGOs, preventing them from carrying out crucial work.

“In many countries, organisations who dare to speak out for human rights are being bullied into silence. Groups of people who come together to defend and demand human rights are facing growing barriers to working freely and safely. Silencing them and preventing their work has consequences for everyone.”

In the past two years alone, almost 40 pieces of legislation that interfere with the right to association and are designed to hamper the work of civil society organisations have been put in place or are imminent around the world. These laws commonly include implementing onerous registration processes for organisations, monitoring their work, restricting their sources of resources and, in many cases, shutting them down if they don’t adhere to the unreasonable requirements imposed on them.

In Russia, the government has labelled NGOs who receive foreign funding “foreign agents” – a term synonymous with “spy”, “traitor” and “enemy of the state”. The authorities apply this legislation so broadly that even an organisation supporting people with diabetes has been heavily fined, put on the “foreign agents” register and forced to close. Medical, environmental and women’s rights organisations have also come under fire.

The repressive policies of the Russian government have caused a ripple effect reaching several other countries. In Hungary, a number of NGOs are being forced to label themselves as “foreign funded” as the government seeks to discredit their work and turn the general public against them. Organisations failing to comply with these rules face high fines and ultimately the suspension of their activities.

Organisations working in support of migrants and refugees have also been purposefully targeted and their staff harassed after a new set of laws were passed in June 2018.

“We don’t know what is going to happen to us and other organisations, and what laws will be passed next.

“Several members of our staff have been subjected to online trolling, abuse and threats of violence. Some venues refused to host our events and there were schools that refused to hold human rights education activities for fear of repercussions.”

Last October, Pakistan’s Ministry of the Interior rejected registration applications from 18 international NGOs, and dismissed their subsequent appeals, without giving a reason.

NGOs in Belarus are also subjected to strict state supervision. Working for those NGOs whose registration request is rejected (often arbitrarily) is a criminal offence.

In Saudi Arabia, the government can deny licences to new organisations and disband them if they are deemed to be “harming national unity”. This has affected human rights groups, including women’s human rights organisations, who have not been able to register and operate freely in the country.

In Egypt, organisations which receive funding from abroad need to comply with stringent and arbitrary regulations. This has led many human rights defenders being banned from travelling, having their assets frozen and prosecuted. Some could face up to 25 years in prison if convicted of receiving foreign funding.

UK must support this vital work at home

“We are witnessing a global crackdown on human rights defenders and NGOs on a scale we’ve never seen before. In this context, governments like the UK must stand up and be counted as strong and unequivocal supporters of civil society engagement, at home and abroad.

“This means prioritising human rights defenders in its foreign policy work and – vitally– leading by example here at home.

“Our report also highlights that UK organisations are concerned that the Lobbying Act is stifling their campaigning work in the run up to, and during elections.

“Let’s face it the lobbying act is confusing and concerns that it could be having a chilling effect on charitable organisations in this country must be taken seriously. Organisations appear to be refraining from campaigning on issues during elections as they are unsure whether they will fall foul of this confusing and burdensome legislation, this needs to be sorted out urgently.”