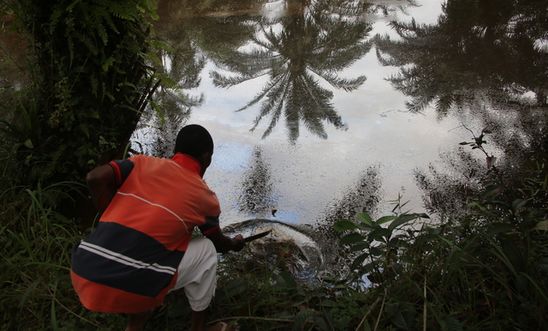 Every year there are hundreds of new oil spills in the Niger Delta, polluting the waterways and crippling local livelihoods © Amnesty International

Thousands of Amnesty supporters from around the world are expected to take part in the “Decode Oil Spills project”, aiming to hold oil companies like Shell and ENI to account for the environmental damage they’ve caused in the region.

Amnesty is inviting digital volunteers to help determine the cause and location of oil spills by analysing photos and documents using their smartphone, tablet or laptop. While there is a vast amount of publicly-available data on Nigerian oil spills from 2011 onwards, much of it is only available in scanned, handwritten documents, making it impossible to extract information at scale. The several thousand volunteers will use Amnesty’s digital platform to assemble a large-scale information databank, utilising a built-in verification mechanism - meaning that each image will be shown to a number of different decoders and be treated as verified when agreement is reached over what has been analysed. Amnesty researchers will also perform quality and veracity checks.

Shell has previously made false statements relating to oil spills to minimise compensation payments or avoid cleaning up pollution, including claiming that spills were caused by oil thieves or pipeline saboteurs rather than corroded pipes. By analysing key data, the digital activists will help expose false oil company claims and better empower local communities to demand proper clean-up and compensation.

Hundreds of oil spills occur in the Niger Delta every year, most of which are not properly cleaned up. Since 2007, there have been more than 1,700 oil spills from Shell’s operations, while the Italian oil company ENI has reported more than 3,000 spills in the same period. More widely, decades of pollution linked to the oil industry has destroyed people’s livelihoods, undermined their rights to clean water and food, and put their health at serious risk.

Last week a case was launched against Shell in the Netherlands, accusing it of complicity in the unlawful arrest, detention and execution of nine men - including Ken Saro-Wiwa  leader of the Movement for the Survival of the Ogoni People - who were hanged by Nigeria’s military government in 1995.

“The Decode Oil Spills project means anybody with a mobile phone or laptop can contribute to vital research into human rights abuses, and marks a new chapter in the way people can hold companies to account.

“The Niger Delta is one of the most polluted places on earth. For far too long wealthy oil companies have evaded justice for the utter devastation they have caused to the land and water of the Delta, and to the livelihoods of hundreds of thousands of people in the region.

“Shell has relied on demonstrably false claims to avoid accountability, but with the help of digital activists from around the world we are determined to uncover the truth.”

Amnesty originally launched a “Decoders” platform last year. Since then the site has grown into a community of tens of thousands of digital activists able to work with large volumes of “messy” information and transform it into structured evidence of human rights violations. Since the platform’s launch, Amnesty has completed three projects mobilising 45,000 digital volunteers from 150 countries.