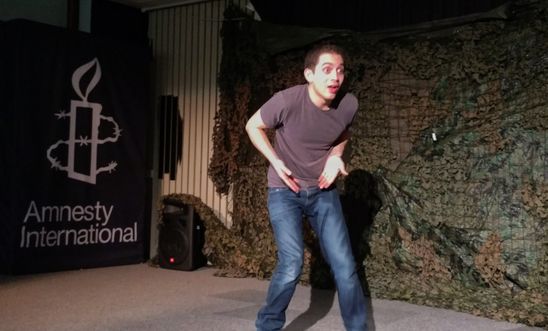 On Thursday 18 May Amnesty International is hosting the premiere of a new play to mark the 50th anniversary of the Israeli military occupation of Gaza, the West Bank and East Jerusalem.

Thaer, a 13-year-old Palestinian-Syrian refugee on a boat in the perilous seas between Turkey and Greece, has something troubling him - and it’s not the fact he might drown at any moment. Nibal, a 17-year-old girl finishing her exams in a school in Ramallah, is constantly refusing marriage proposals from suiters - but can’t resist one particular man. Zeid, a 21-year-old taxi driver in Gaza is using Tinder to try to find a date. Meanwhile, aspiring actor Sami, is taking roles in the Israeli city of Haifa in order to establish a reputation.

“Camouflage” is a one-hour, one-person play performed entirely by acclaimed actor James El Sharawy. The theatrical production for “Camouflage” is by Cleo Capeille and Ian Fisher.

“When I wrote Camouflage, I wanted people to get closer to the lives of young people living under occupation and conflict, taking them on a journey that makes them see the place, smell it, feel it and at the same time laugh out loud. The play offers a collage of situations that zoom into what concerns young people in Palestine, and how they deal with such issues.”

For decades, Amnesty has reported on a host of human rights violations associated with Israel’s illegal military occupation of Palestinian territory, including severe restrictions on Palestinians’ freedom of movement, the use of excessive - and frequently lethal - force against Palestinian protesters and other civilians, and the “administrative detention” of hundreds of Palestinians using closed military procedures.

“Israel’s illegal military occupation of the Palestinian territories has been a 50-year-long tragedy for Palestinians, but intriguingly Camouflage tackles this tragedy with humour and tales of young love. Camouflage promises to be an enthralling experience.”

What: performance of “Camouflage”, followed by an informal drinks reception