New briefing calls for end to unlawful use of drones 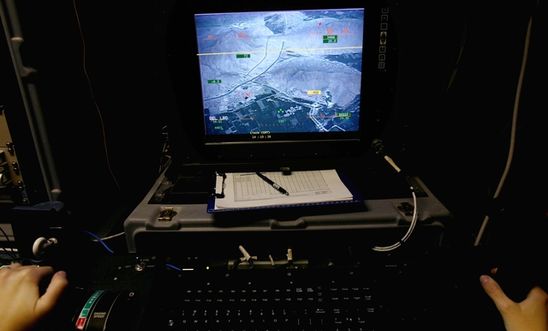 A drone operator in a control centre in Las Vegas, USA, at the controls of a Predator drone flying over Kandahar in Afghanistan © Veronique de Viguerie/Getty Images

Amnesty International has launched a new briefing at the UN General Assembly today setting out key measures needed to bring the use and transfer of armed drones into line with international human rights and humanitarian law.

The 16-page document, Key principles on the use and transfer of armed drones, has been developed in response to the rapid proliferation of armed drones, and their use in numerous extrajudicial executions and other unlawful killings around the world.

Last week, it was widely reported that a British woman, Sally-Anne Jones, and her 12-year-son were killed in a US drone strike in Syria earlier this year. Amnesty said the manner of her reported killing gave rise to very serious questions, including whether the UK or US authorities made any assessment of the dangers of killing or injuring others present at the time of the strike, and - if the UK was involved in the attack - on what grounds the UK authorities believe that it been justified in carrying it out.

“The past few years have seen an alarming growth in the use of armed drones by states including the USA and the UK, yet the circumstances in which they are deployed remain shrouded in secrecy.

“What we do know is that their use has created a situation in which the whole world can be treated as a battlefield, and virtually anyone can count as collateral damage. Armed drones have been used to carry out unlawful killings with minimal oversight and accountability, and with devastating consequences for civilians in countries like Yemen and Afghanistan.

“We are calling on all states to bring their use of armed drones in line with international human rights and humanitarian law - unlawful use must not become the norm.”

The principles outlined in Amnesty’s briefing provide a basis on which UN member states can develop binding policies that will ensure accountability, protect the right to life and prevent future violations and abuses. Amnesty is calling on all UN member states to:

Establish rigorous controls on transfers of armed drones, and on assistance to operations of other states using armed drones