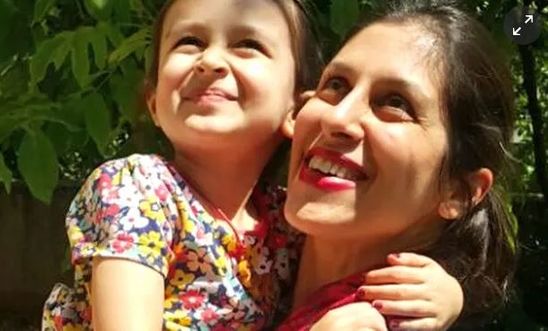 “Coming soon after Nazanin and her fellow prisoner of conscience Narges Mohammadi announced their intention to go on hunger strike in protest at being denied medical treatment, the appearance of this footage is sinister and disturbing.

“The Iranian authorities have a track record of airing propaganda videos and making statements about individuals as part of a calculated attempt to publicly smear them.

“What we see in the footage is a stunned person about to begin a terrifying ordeal of prolonged solitary confinement before being put through a deeply unfair trial.

Nazanin Zaghari-Ratcliffe, 40, a British-Iranian dual-national, was arrested at Tehran’s Imam Khomeini airport on 3 April 2016 prior to boarding a plane back to the UK after a regular family visit to the country with her infant daughter Gabriella. After being detained in solitary confinement without access to a lawyer, Zaghari-Ratcliffe was sentenced to five years in prison in September 2016 after being convicted of “membership of an illegal group” in a grossly unfair trial by a Revolutionary Court in Tehran. The conviction was in connection with her employment at Thomson Reuters Foundation, a charity promoting socio-economic progress, independent journalism and the rule of law, as well as her past work as an administrative assistant with BBC Media Action. The sentence was upheld on appeal the following year and her subsequent request for judicial review has been denied.

Zaghari-Ratcliffe recently completed her 1,000th day in detention, and three days prior to that she turned 40 in jail. More than 175,000 people have supported Amnesty’s campaign for her release.

Narges Mohammadi is a distinguished Iranian human rights defender who has been jailed several times for her peaceful human rights work in Iran. She is currently serving a 16-year jail sentence in relation to her campaigning against Iran’s use of the death penalty and over communications she had with an EU official. Mohammadi suffers from several very serious health conditions, including a pulmonary embolism (a blood clot in her lungs) and a neurological disorder that results in seizures and temporary partial paralysis. She requires ongoing specialised medical care, which she cannot receive in prison.