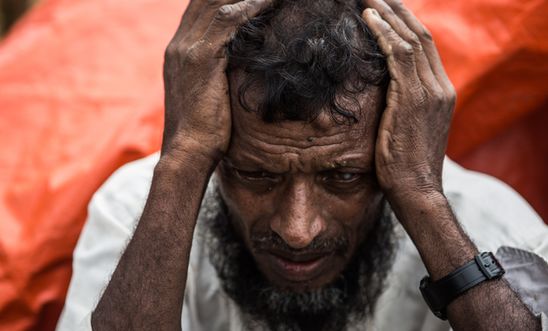 Abdul Amin, one of more than 600,000 Rohingya to have fled Myanmar in recent months © Andrew Stanbridge / Amnesty International

“While it is disappointing that Pope Francis did not use the word Rohingya during his speech in Myanmar today, his calls for respect for all ethnic groups and an inclusive society are welcome.

“Pope Francis’ visit has also helped focus international attention on Myanmar and the horrific crimes being carried out against the Rohingya people on a daily basis by the Myanmar authorities.

“The real scandal of the visit was the insistence of Commander-in-Chief Min Aung Hlaing that ‘there is no discrimination between ethnic groups in Myanmar’.

The Myanmar authorities have trapped Rohingya in a system of repression and segregation that amounts to the crime against humanity of apartheid.

“Other ethnic and religious minorities in Myanmar are also discriminated against and face wide-ranging human rights violations at the hands of the military.

“These violations must stop, all ethnic groups must see their rights respected and the perpetrators held to account - regardless of their rank or position. This is what the focus of the international community must be on.”

Last week Amnesty published a major report showing how the Rohingya people in Myanmar are trapped in a vicious system of state-sponsored, institutionalised discrimination amounting to apartheid. The report showed how the root causes of the recent wave of violence in Myanmar - with the security forces killing Rohingya people, burning whole villages to the ground, and driving more than 600,000 to flee across the border into Bangladesh - are this system of discrimination, which applies to virtually all aspects of Rohingyas’ lives in Rakhine State, with the Rohingya confined to a ghetto-like existence.