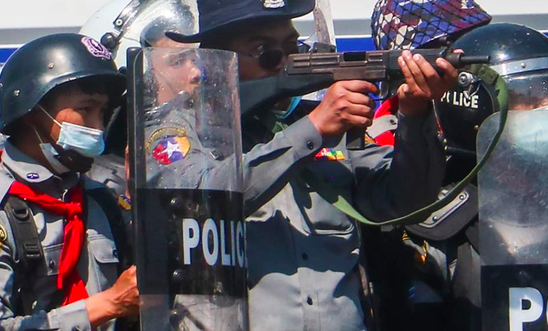 A young woman was shot in the head by Myanmar’s security forces during protests, Amnesty International has confirmed, after investigating footage showing the attack.

A video shared on social media of the shooting, which happened in the capital of Nay Pyi Taw on 9 February, was verified by Amnesty International’s Crisis Evidence experts. According to media reports, the woman has lost significant brain function and has only a slim chance of survival.

The Myanmar military’s ‘True News Information Unit’ said in a statement that security forces only deployed non-lethal weapons. However, images show a member of the police wielding a Myanmar-made BA-94 or BA-93 Uzi clone, a Myanmar-made variant of this sub-machine gun.

In the verified coordinates of the image, the alleged police gunman is standing at or close to the other side of the road from where the woman was shot.

The distressing video captures the exact moment the young woman, named on social media as 19-year-old Mya Thwe Thwe Khaing, is hit in the side of her head by a bullet as she turns away from security forces. She had been sheltering with protesters from water cannons behind a bus stop when she was shot.

“The serious injuries sustained by this young woman were caused by the Myanmar police firing live ammunition directly towards peaceful protesters.

“The social media materials we have verified show that police recklessly targeted protesters, with no respect for their lives or safety whatsoever. Their abhorrent use of lethal force against protesters is unlawful, and must be independently, thoroughly and promptly investigated.

“The Myanmar security forces’ unnecessary and excessive use of force must stop immediately. As protests continue, it is vital that the people’s right to peacefully express their grievances is respected.”

Earlier this week, tens of thousands of people took to the streets across many cities in Myanmar - including Nay Pyi Taw and the country’s two largest cities, Yangon and Mandalay - to peacefully protest the military coup in the country. They were met with live ammunition, rubber bullets, tear gas and water cannons by security forces as they attempted to disperse protests.

Amnesty International’s Crisis Evidence Lab examined photographs and video shared to social media of the protest in Nay Pyi Taw on 9 February. After the young woman is hit, further gunshots can be heard later in the video, which also captures fire bursts coming from weapons being wielded by police. The location of the shooting was identified as being on Taungnyo Road, just south-east of the Thabyegone Roundabout in Naypyidaw (coordinates: 19.746822, 96.117287).

Further social media posts show the impact the bullet had on the helmet the woman was wearing, as well as brain scans that appear to show her significant injuries.

“Security forces must also ensure the safety and security of journalists, other protest monitors and members of the public observing the protests or by-standers.

“The failure of Myanmar’s security forces in this basic duty in this instance is deeply disturbing.”

The UN Human Rights Council is scheduled to hold a special session on the situation in Myanmar today (11 February).